“Mommy! Mommy! Look what I found!”

These are the first—and some of the only—words in Kitty & Dino, a 2012 book by NH artist and sculptor, Sara Richard. 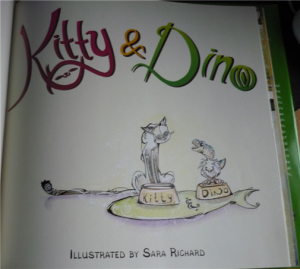 Two unlikely companions—a cat and a dinosaur—are introduced to each other when a little boy brings the dinosaur egg home to his mother. The cat, with great caution and suspicion, inspects this egg. And within a short period of time, a baby dinosaur emerges. 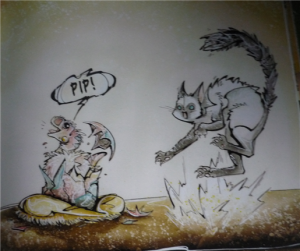 This is a picture book, but it follows graphic novel design.

With pastel colors, bold outlines, and vibrant white bursts of energy throughout, Sara Richard tells a story that almost leaps out of the pages.

Panel after panel illustrates the initial conflict between the two species and then their gradual acceptance of and affection for each other.

Whether the two are chasing butterflies, squirrels or a frog, 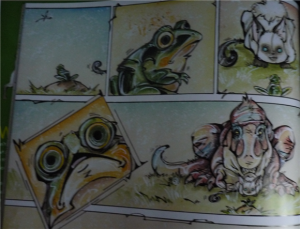 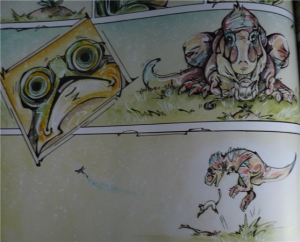 their gestures and images exude playfulness and joy.

The book is remarkably endearing.

One cannot miss the energy in these illustrations. And her artwork displays an expert knowledge of cat (and dinosaur!) movement and anatomy.

But these images also allude to a magical world. One can see this in the white speckling throughout the scenery—whether in the house or outside. Contrasting with pastel colors, the speckling evokes stars, a bit of other-worldliness amongst the otherwise common background. 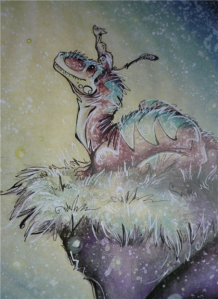 Sara Richard’s art, as described on the book jacket, is influenced by gestural drawing, art nouveau, and Japanese ink paintings. She paints and sculpts, but her work also includes creating action figures. Among other well-known action figure lines, she has worked on figures for Jurassic Park.

She very graciously took the time to answer some questions about her book and her artwork in general. 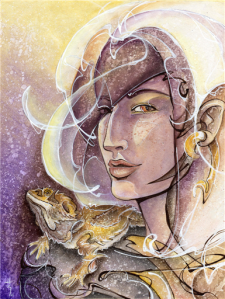 (image of Self-Portrait with Charlie, courtesy of Sara Richard)

1. What inspired you for the story itself?
The story actually was already in place by the editor of Yen Press, the publisher of the book. I met her partner at a comic convention in Chicago a few years ago and he said that they had a story about a cat and a dinosaur, which coincidentally was what my sketch book had a lot of. So it was a right place right time, planets aligned kind of thing.

2. There is a lot of energy in these drawings. Can you tell me more about that or why you chose the colors and the vibrant lines?

I love the organic line work of Art Nouveau and I’ve adopted characteristics of that line work into my art. I always felt that the lines seemed alive and kinetic. When I paint I feel the white lines are sort of representative of the energy in the piece and it just sort of pops! Also I love bright colors. They’re happy.

3. The movements of both cat and dinosaur are so life-like. What are your models for their gestures and their postures?

Haha thank you! Well I’ve always had cats, not a siamese but I always felt that type of cat was so slinky and sassy, so that was fun to play against a really big clumsy dinosaur, which I likened to maybe a great dane type of dog. I’m really interested in paleo art and dinosaurs in general and have watched most of the dino documentaries on Netflix. So that was very inspirational.

4. The book reads like a comic book; I love how one gets a vivid picture of the personalities of the cat and the dinosaur through each panel. Did you sketch out more drawings than are in the book? Or did you use everything?

This book changed SOOO much from the very first drawing to what you see now. I did probably three sets of all the interior pages in thumbnails. The story was written very loosely and it took a few passes to line up with the vision of the editor. I had a few artistic arguments in there about how I felt the compositions and colors would read but we both came to an understanding and that’s what you see!

5. Did you enjoy the experience of creating a children’s book?

It was very much a learning experience working with a writer. I’ve written little stories myself (nothing I’ve published) but I’m currently working on a ghost story and another kid’s book that I will write and illustrate myself. I’m really looking forward to it!

6. Are there any reactions to the book you want to share?

I love hearing how people who’ve read it can see the big dog influence in the dino and when they tell me the cat has the same attitude as their own. Also when I hear that kids reading it will make up their own words or sound effects as they read it. I think it’s great that people can have their own experiences with the story since there is no set dialogue. (save two word bubbles). That and I love hearing they really like the artwork!

I love dinosaurs! Probably really started getting interested in them my senior year of college though. 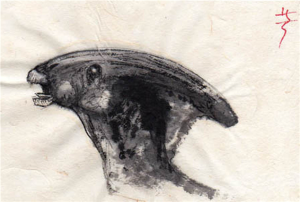 8. The book jacket mentions that you are an illustrator for Prehistoric Times Magazine, and that—among others—you have sculpted action figures for Jurassic Park (Hasbro). Can I ask which Jurassic Park figures you sculpted?

I did about three full dinosaur sculpts, two of which will hopefully see the light of day soon, one I hear was lost. You can find images of the carnotaurus and Stegosaurus I worked on. Hopefully when the new movie comes out my figures will be on the shelf. I also re sculpted another dino from another sculptors’ interpretation that wasn’t quite up to the standards my managers wanted. That one is pretty cool….wish I could say more!

9. Can I also ask what is involved in creating figures for a toy company? Do they provide the material? Do they tell you specifically what they want or is there a lot of room for creativity?

The figures for Hasbro when I was there were mostly done in wax. Now they are primarily digitally sculpted (in my opinion losing the imperfections and more lifelike qualities that hand sculpting produces). When they were sculpted in wax, the material was very brittle and we sculpted in all the articulation to make the figure move. There was a lot of cursing sometimes, especially when a tiny piece fell on the floor and shattered. There is a design department that creates the design of the figure and the sculptors follow it. I found I could be creative with loose elements like hair and clothing, but for the most part you had to follow what the designer made. 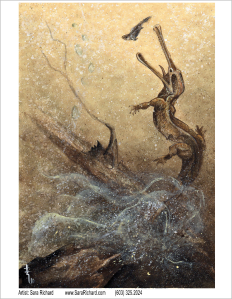 A T-Rex sized THANK YOU to Sara Richard for her time, her responses, and her beautiful artwork!!

You can see more of her artwork and learn more about Sara Richard on her website: http://sararichard.com/

You can order Kitty and Dino from your local independent bookstore! Or you can order it at Amazon.com, Barnes and Noble or your local comic book store. 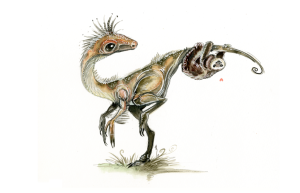 (Image of Dino and Sloth, courtesy of Sara Richard)

One thought on “Kitty and Dino – spotlight on NH artist, Sara Richard”