Hadrosaurs are commonly referred to as “duck-billed dinosaurs.” An herbivore that once roamed Europe, Asia and North America, this particular species of dinosaur has provided exciting finds in the form of “dinosaur mummies”.

The “Trachodon mummy”, discovered in 1908 in Wyoming, now resides in the American Museum of Natural History.   This provided skin impressions in the rock surrounding the fossil.

There are currently two subfamilies of hadrosaurids: lambeosaurine and saurolophine (previously known as hadrosaurine).  Their differences lie in the hollow crest of the former; the lack thereof of the latter.

Hadrosaurs were the first dinosaur that Dr. Penélope Cruzado Caballero discovered in her fossil digs.

Dr. Cruzado Caballero works both in Argentina and in Spain. In Argentina, she is a researcher at CONICET (Consejo Nacional de Investigaciones Científicas y Técnicas).  She is a professor at the  Paleobiology and Geology Research Institute (Instituto de Investigación en Paleobiología y Geología) at the National University of Rio Negro. In Spain, she is also a member of the Aragosaurus Group, a research group affiliated with the University of Zaragoza.

She has written extensively on hadrosaurs.  Despite her very busy schedule that included traveling between continents, she very graciously responded to my questions below. 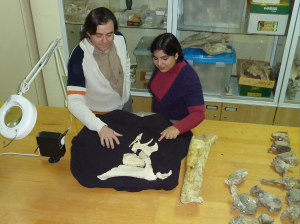 1. How long have you been a paleontologist?

I started research as a student in 2004, but I became an official paleontologist in 2012 when I finished my thesis.

2. Where have you dug for fossils?

Fundamentally, I have dug in several places in Spain (Burgos, Cuenca, Huesca, Lérida, Teruel and Zaragoza), but I have also dug in France (Esperaza) and am now digging in Argentina (Las Lajas).

3. Have you discovered any new species in your work?

Yes. During my thesis, I had the opportunity of discovering a new species of crocodile (Allodaposuchus subjuniperus),  and I have participated in the discoveries of a possible new ornithopod and a possible new sirenid.

4.  From your articles, it looks like your work focuses on Hadrosauridae and Lambeosaurinae. Is this correct?

Yes, my thesis doctoral was about the hadrosaurs’ remains from Huesca (Spain).

5. What interests you about this group of dinosaurs?

Hadrosaurs were my first introduction into the world of dinosaurs, and I like their paleontology. I love them.

6. Do you work with scientists from all over the world? If so, from what countries and on what projects?

Currently, I collaborate with Argentinian and Spanish scientists to study hadrosaur relations and behavior in Europe and South America.

7. What types of fossils are found in Spain?

In the Aragosaurus Group, I have had the opportunity to find and dig every type of vertebrate within the Mesozoic era and Paleogene period.

The Aragosaurus Group at the University of Zaragoza, Spain: http://www.aragosaurus.com/

A New Crocodile from the Upper Maastrichtian of Spain: Implications for the Initial Radiation of Crocodylids, Plos One

La Cantalera: an exceptional window onto thevertebrate biodiversity of the Hauterivian-Barremian transition in the Iberian Peninsula, Journal of Iberian Geology

I’d like to extend an Argentinosaurus huinculensis-sized THANK YOU to Dr. Penélope Cruzado Caballero for taking the time to answer my questions despite her busy schedule, and for her generous and fun responses to my emails! What a great pleasure!