Every three to four years, mammoth experts and scientists from all over the world congregate for several days to discuss the most recent findings and cutting-edge discoveries.

This year, that event takes place in Greece.

This location is particularly fitting, not only for its exciting mammoth and mastodon finds (including the world’s largest tusks found to-date), but also because the name of the mammalian Order to which mammoths belong is derived from a Greek word: proboskis (προβοσκίδα).

The name Proboscidea–from proboscis (trunk)—aptly describes some of its more popular members: today’s elephants and yesterday’s mastodons and mammoths.

This marks the 6th time this conference has been held.  It is not an annual event, nor is it necessarily held in the same location or on the same continent.

This year’s honorary president is a US-based scientist: Dr. Larry Agenbroad, from the Mammoth Site in Hot Springs, South Dakota.

The president of the conference is Dr. Evangelia Tsoukala, Associate Professor of Geology at the University of Thessaloniki, and one of the team of paleontologists who excavated the largest tusks mentioned above.

The vice president is Dr. George Theodorou, Professor of Palaeontology and Stratigraphy at the National and Kapodistrian University of Athens.

The list of scientists and experts involved in this event is both impressive and exciting.  Among so many others, (there were too many to mention here, but you can find them at this link) some of the participating specialists are:

(Image of the Historical Paleontological Collection of Siatista, Municipality of Voion, courtesy of the OC of the VIth ICMR)

Evangelos Vlachos, a PhD student at the Aristotle University of Thessaloniki and one of the many organizers of the event very generously responded to my questions.

1. What will your PhD be in and what is your doctoral thesis? How did you become involved in the Mammoth Conference?

I am doing my PhD on Vertebrate Paleontology, specifically on the study of turtles and tortoises from Greece.

But what is a “turtle guy” doing at the Mammoth Conference?

Well, being part of Evangelia Tsoukala’s team includes excavating for proboscideans, including some of the biggest ever lived. In my first years of study, I considered working with fossil proboscideans, but later I changed to the study of chelonians.

My first experience with the Mammoth Conference was at the Vth Mammoth Conference in Le Puy-en-Velay, France in 2010.  In Le Puy, the Greek side participated with many oral and poster presentations, and the scientific community had the chance to get familiar with the exciting proboscidean findings from Greece.

[Image of poster presentations of the Greek-Dutch team during the Vth ICMR in Le-Puy-en-Velay, France (2010, picture credits W. van Logchem), courtesy of the OC of the VIth ICMR)]

2. How wonderful that the Mammoth Conference is held in Greece this year! How was the decision to hold it in Greece made?

Indeed, it is wonderful, but it was sudden!

Normally, at the end of each conference, the Organizing Committee examines all of the available proposals and decides where the next Mammoth Conference will be held.

In Le Puy, the Organizing Committee decided that Anchorage, Alaska would host the VIth Mammoth Conference in May 2013. Although the scientific community was excited to visit this remote place, which has played an important role in the history of the mammoths, things didn’t work out.

In the beginning of 2014, new proposals were requested. Within a few days, we filed a proposal to host the next conference in the historic towns of West Macedonia, Grevena and Siatista, which have brilliant collections of fossil proboscideans.

Luckily, our proposal was accepted, and we are honored to host the next conference in Greece.

[Children making their own mammoth under the guidance of the Dutch artist Remie Bakker, during the opening ceremony of the Historical Paleontological Collection of Siatista. Similar events are going to be held during the conference (2011, picture credits V. Makridis), image courtesy of the OC of the VIth ICMR)]

3. Who organizes this conference and who determines the president of the conference? (Do the organizers change each year?)

The organization of the conference is the responsibility of the Organizing Committee.

Some members are regular; they have been there since 1995 when the first conference was held in Saint Petersburg.

Specialists like Dick Mol provide the experience of organizing a Mammoth Conference and access to the network of the proboscidean scientific community.

This year, we are privileged to have a large Scientific Committee of 43 specialists from all fields related to proboscidean study. Moreover, in this conference, many young scientists are included in the Scientific Committee, which is very important for us. One of the goals of this conference is to ensure that the study of proboscideans will not only have a glorious past, but a great future as well.

4. Who typically attends this conference? Do you have an idea of how many people will be attending this year?

The Mammoth Conference attracts the interest of scientists from many different fields, but all joined by the interest of promoting knowledge surrounding proboscidean evolution.

Among the numerous participants, you will find paleontologists presenting new findings that improve our knowledge of the fossil record; geneticists examining the DNA of present-day elephants and from the frozen carcasses of the woolly mammoths; scientists applying new techniques like stable isotope and dental microwear analysis on proboscidean molars; archaeologists investigating the interaction between humans and proboscideans.

This is not all. At each conference, something new comes up!

Early registration for the participants closed on 31th of January 2014.

The interest of the proboscidean community in the VIth ICMR was enormous and far exceeded the expectations of the Organizing Committee!

We received more than 150 registrations from all corners of the world: from Cape Town, South Africa in the South to Stockholm, Sweden in the North; from Wollongong, Australia in the Southeast to Edmonton, Canada in the Northwest; from Kusatsu, Japan in the East to Nevada in the West; from Rio de Janeiro, Brazil in South America to Yakutsk in Siberia. In total, all the participants will have to travel more than 11 times the circumference of Earth to come to Grevena and Siatista!

(Geographic representation of this year’s Mammoth Conference participants, image courtesy of the OC of the VIth ICMR))

5. How does one decide what topics and papers will be discussed?

The Organizing Committee, in close co-operation with the Scientific Committee, set an initial number of topics to be discussed in the conference. They have to summarize the current open questions in the field.

Some of the topics, however, are “classical,” we could say, such as the information from soft tissues from the frozen carcasses, or the interaction between humans and mammoths.

At the same time, in every conference we are trying to promote the regional research by proposing topics that could stimulate researchers to come up with ideas. For example, in our conference, we are particularly interested in the “primitive” probiscidean proboscidean forms–before the appearance of mammoths–like the mastodons or gomphotheres.

Sometimes, the participants are able to propose new topics of interest. This was the case with our Brazilian colleagues, who suggested we have a session on extinct South American proboscideans that, until recently, have been relatively unknown.

6. What do you think is the most exciting part of the Mammoth Conference?

As a young scientist, the most exciting part is definitely to get to know all the well-known specialists in this field and exchange ideas with them.

Standing up in front of a well-qualified audience and presenting your ideas is a great challenge. But the experience you get is unique.

[Presenting in front of the world’s leading experts (Vth ICMR in Le-Puy-en-Velay, France, 2010, picture credits V. Makridis), image courtesy of the OC of the VIth ICMR)]

In the end, when you are returning to your country, you feel overwhelmed by the information you have received. But as the days go by, ideas start to form and with the experience gained by attending an International Conference, you can make good progress on your studies.

Science is not only reading and writing, but communicating your ideas. 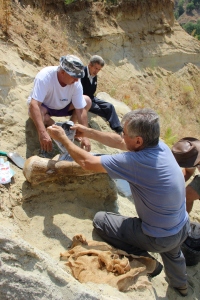 [Preparing a plaster jacket for a partial femur of a mastodon. Now this specimen is part of the Paleontological Exhibition of Milia (2012, picture credits W. van Logchem), image courtesy of the OC of the VIth ICMR)]

Moreover, it is always exciting to take part in the field trips of the Conference.

In our conference, not only we will visit all of the impressive sites in Northern Greece, like Grevena, Milia, Siatista and Ptolemaida, but we have planned a unique post-conference field trip. The participants will travel to the remote island of Tilos where the last European elephants lived, as dwarf forms, in the Charkadio Cave. To reach this island, we will go through Athens and the world famous site of Pikermi. 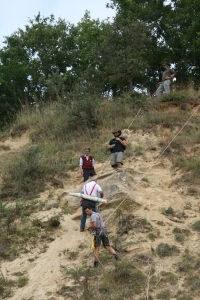 [Excavating in site Milia-4 using rope techniques. One of the sites that the participants will visit during the Field Sessions of the conference (2010, picture credits W. van Logchem), image courtesy of the OC of the VIth ICMR)]

7. Are there any challenges to organizing or hosting the Mammoth Conference?

The amount of work needed to arrange everything–the registrations, the abstracts, transportation and accommodation, the field trips–is enormous. In those cases, especially when you have so many people from different countries and cultures, you need to pay attention to every detail to make sure that all will go according to plan.

But the Organizing Committee is working hard, night and day, to extend an example of traditional Greek hospitality to everyone involved!
8. Is there anything else that you would want people to know?

This week, members of the Organizing Committee visited the places where the conference will take place (Grevena, Milia, Siatista and Ptolemaida) and inspected all venues, exhibition and facilities. At the moment, everything is going according to plan and the Organizing Committee works day and night to make a wonderful conference for the participants.

(Image of the the Paleontological Exhibition of Milia, Municipality of Grevena, courtesy of the OC of the VIth ICMR)

I would like to extend an Archelon ischyros-sized thank you to Evangelos Vlachos for his lightning quick responses to my emails, his generosity and his detailed answers!

When he mentions that the Organizing Committee works night-and-day for this conference, he is not kidding. Some of our emails were exchanged at 3am his time!

Thank you, as well, to Dr. Evangelia Tsoukala and to Dick Mol, who also generously shared their time for this post (behind the scenes)!

Videos on YouTube related to the Conference and excavating the world’s longest tusks from the mastodon in Greece!

(The video above is multilingual.)

It has been my great honor to have connected previously with two of the many mammoth experts listed above:

2 thoughts on “VI International Conference on Mammoths and Their Relatives – May 2014!”