The current mammoth and mastodon exhibit at the Indiana State Museum is the brainchild of paleobiologist, Ronald Richards.

In a phone interview, he discussed the evolution of this exhibit; excavating fossils in Indiana; and working with neighboring proboscidean experts: Dr. Chris Widga, Dr. Jeffrey Saunders and Dr. Dan Fisher.

Chances are, most people—upon seeing the image below—would describe these animals as ‘woolly mammoths.’ 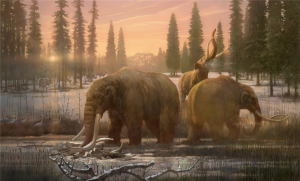 [Image courtesy of Indiana State Museum, more info at the end of the blog post*]

And many would not point to the state of Indiana as a rich source of these fossils.

Which are two of the myriad reasons behind the creation of Ice Age Giants: The Mystery of Mammoths and Mastodons, an exhibit currently available at the Indiana State Museum in Indianapolis. 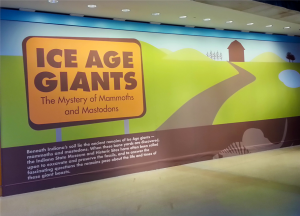 The exhibit opened this past November, but it has taken years of hard work, as well as numerous people and resources, to bring it to fruition.

“It’s a process that consumes your life,” said Ron Richards by phone, referring to the creation of an exhibit. “It consumed me for a couple years. I mean, there’s always a deadline; there’s always something you haven’t got done.”

“It’s not for the frail, I’ll tell you,” he added with a chuckle.

Ron Richards, Paleobiologist at the State Museum, had the idea for the exhibit back in the 1990s.

Thirty years of work there—a job that involves both educating the public and excavating fossils—has provided plenty of fodder for potential displays.

He remarked how often, after giving talks about local fossils, people would approach him in wonder and say, “THIS was found in Indiana??”

With gentle enthusiasm—a cadence that accentuated his descriptions—Ron described what he hoped visitors would take away from the exhibit: how to tell the difference between mammoths and mastodons, the age and gender of such fossils, a better understanding of the habitat that was Indiana during the time of the Pleistocene, and the knowledge that people at the museum are actively digging up these fossils within the state.

So what exactly is the difference between a mammoth and a mastodon?

Almost universally, the word ‘mammoth’ invokes but one of 160 known proboscidean species: the woolly mammoth.

The most common mammoth fossils throughout the United States, however, are that of the Columbian mammoth—a veritable behemoth that probably did not have the same furry coat as their woolly relatives and tended to live in warmer climates.

Woolly mammoth fossils are found largely in the upper parts of North America, as well as in Russia, Europe and China. 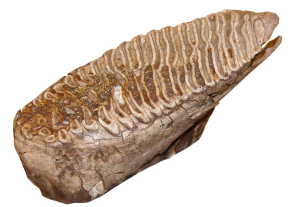 [Image courtesy of Indiana State Museum. Teeth are an easy way to determine whether a fossil is a mammoth or a mastodon. This is a mammoth tooth. Notice the flat surface with ridges for grinding vegetation.]

Mastodons—the mammoth’s stockier, and, compared to some mammoth species, shorter and hairier cousin—also lived throughout the United States.

Physically, mastodons differ from mammoths in that their backs and their tusks are straighter, their teeth are easily recognizable as teeth (they are bumpy), and their heads are generally smaller. 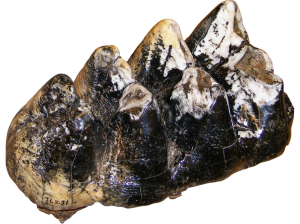 [Image courtesy of Indiana State Museum. Above is a mastodon tooth.]

Yet the woolly mammoth and the American mastodon are often confused.

According to Mammoths & Mastodons of the Ice Age, by Dr. Adrian Lister, “in their detailed adaptations and their evolutionary position [the American mastodon and the woolly mammoth] were as distinct as a human and a monkey, separated by at least 25 million years of evolution.” (Firefly Books, 2014, pg. 42)

Still, faced with a large skeleton with tusks, four legs, and a short tail, most would immediately assume ‘mammoth’. 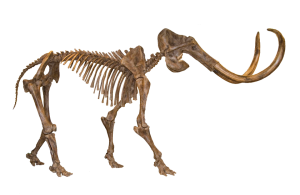 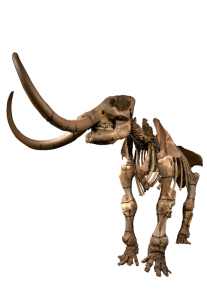 [Can you tell which skeleton is a mammoth and which is a mastodon? Images courtesy of Indiana State Museum.]

How does one pull together so much information–so many possible ideas–into a coherent and engaging learning experience for the public?

“Even I, when I walk through an exhibit, I don’t want to read very much,” confessed Ron. “You have to find a real good balance.”

“One day,” he continued, “we just cut out all the [potential exhibit] labels, and we laid them out in a whole big room. Then we lay down the images of all the proposed specimens. There were about 300! And I realized that when someone walks through this, they want a 45-minute or an hour tour on a 5,000-foot space. How much can we tell them?

“So I just walked through and dictated [the narrative] as though I were giving a special tour for somebody…a VIP… of the exhibit. I timed it to about 45 – 50 minutes. And actually then we converted it into text, more or less.”

Doing so caused him to further realize, “Hey, there just isn’t time to talk about all these little things.”

“We had some high hopes, but it came down to, well, we just can’t do all that. It’s very expensive. We haven’t got the money. We can’t fit it all in. And we’d never get it done.”

He paused for a moment to recall the wise words of an archaeologist with whom he’d worked: ‘There are great projects, and there are finished projects.’

“I understood,” he continued, “that this could go on for a long time. And we really just had to get it done, because it had been dragging since 1990.”

The centerpiece of this exhibit is the Buesching mastodon—a nearly complete male mastodon fossil discovered in Indiana in 1998. It was found on land belonging to Janne and Fred Buesching. The fossil has been nicknamed “Fred”, in honor of Mr. Buesching, who has since passed away. 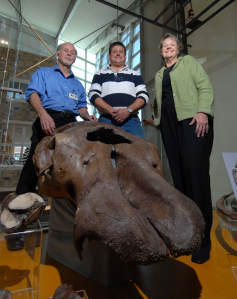 “One advantage we have with an in-house exhibit—and there have been a lot of mammoth and mastodon exhibits out there—is that normally they have to work with casts (as they’re transporting them, and you can’t have curators go with them). Because [our exhibit is] in-house, we used mainly REAL bone. That is a big difference. And the other is that we focus right on Indiana.”

The Buesching mastodon exemplifies this: it was mounted using its actual bones. This feat was accomplished with the help of people at the NY State Museum, who had demonstrated that this could be done on a fossil of their own. 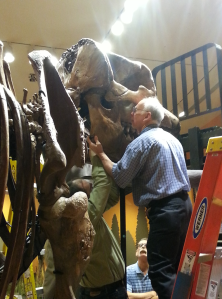 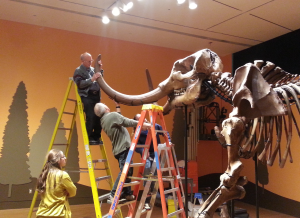 Ron noted another striking distinction: the legs of this mastodon were brought in, mimicking the pose of a fossil cast of this same animal done by proboscidean expert Dr. Daniel Fisher.

Prior to making its home at the Indiana State Museum, the Buesching mastodon was studied by Dr. Fisher at the University of Michigan. The Bueschings had initially contacted Dr. Fisher when the fossil was found.

“He went down and gave them some pointers, some assessments of the site,” Ron explained, “and after that, Dan said, ‘Boy, I’d really like to study this’, so they shipped it up to him.”

“At that point, he took it on. He actually made some casts of Fred.”

“He brought the legs underneath the animal like mastodons and elephants walk. Normally, [museums] stand their skeletons like a bulldog, with their legs real wide. Not only does he understand modern elephants and how they move, but he also has a track-way [of proboscidean footprints] from Michigan to prove it!” 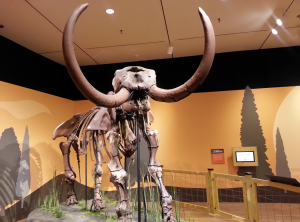 [Image courtesy of Indiana State Museum, the Buesching mastodon as it appears in the exhibit]

“It’s really a piece of art,” he concluded of the Buesching mastodon.

The exhibit contains a wealth of information and exciting fossil displays. Among other things, one can see a simulated dig pit with real bones as they might have been found, casts of mastodon and mammoth jaws that mechanically demonstrates how they worked, and examples of some of the bones discovered in Indiana. 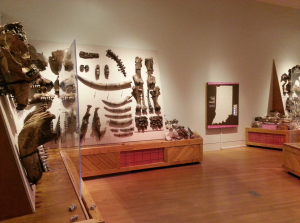 [Image courtesy of Indiana State Museum, the Hall of Giants–Ron Richards’ favorite par of the exhibit]

There is discussion regarding the theories behind the mammoth and mastodon extinctions: hunted too heavily by people? Disease? Rapid environmental change?

There is even an audio and video panel designed to give visitors an idea of what it might have been like to hunt a mammoth.

‘So you think you can hunt a mammoth with a spear, huh?’ says a label near a metal spear.

Touching the spear triggers a large screen to initiate an image of a mammoth. The floor underneath the visitor begins to vibrate with the sound of an animal charging, as the image of the mammoth becomes larger and larger. 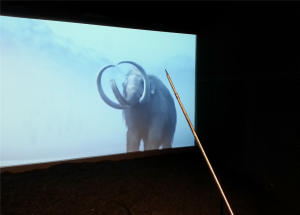 [Image courtesy of Indiana State Museum, metal spear and the growing image of a mammoth charging toward the visitor]

Said Ron of that particular display, “I wanted [visitors] to get an emotional charge!”

And to give visitors a sense of just how many fossil sites have been discovered in Indiana, the team at the museum created an interactive map.

“There could be another couple hundred,” he continued, referring to more data from ongoing research that is not included on the exhibit map. “I’ve been doing this research for years, even before [working at] the museum, so I’ve got a lot of dots on maps.” 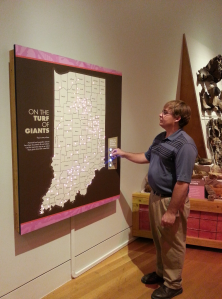 That number is extraordinary.

Given how many fossils have been found locally, one might wonder why this is a temporary—rather than a permanent—exhibit.

“We’re a state museum,” Ron responded. “So we deal with archaeology, paleontology, geology, biology and natural history. We’ve got Amish quilts; we’ve got fine art; we’ve got sports history; [general] history; popular culture; science and technology; applied technology. We’ve got curators in all these areas. We’ve only got so much rotating space. And there are other stories. And we’ve got to constantly bring people in the door.”

“I wanted to have a 2-year exhibit,” he continued, referring to the Ice Age exhibit, “but we have granting and funding for a lot of things that need to fill that space. I think our exhibit schedules are set for 5 years out.”

“If I had my druthers, I’d say, ‘let’s leave it in for 2 years.’ But then it starts tapering down. After a while, everybody has sort of already seen it.”

Included in this exhibit is information regarding today’s elephants, a distant relative of mammoths and mastodons, not a direct descendant. Elephants are in danger of extinction themselves. 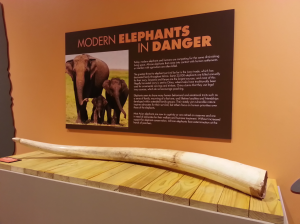 This particular part of the exhibit is important to Ron, but he paused to ponder some of the conflicts between people and elephants.

“It’s hard to talk to other cultures and countries and tell them how they should take care of THEIR wildlife,” he mused. “I mean, you look back at North America, and you look at what happened to bison, and the passenger pigeon, and you know, we’ve been through this ourselves until we had conservation laws.”

“Look at how abundant deer are today, but the white-tailed deer were extirpated from Indiana by 1891. They were hunted out. There were none left. And they were all reintroduced [later].”

“Without regulation, you get hunted out into extermination.”

*Initial image in the blog post is of mastodons.

Part 2, discussing fossil excavations in Indiana, coming up next!

Ice Age Giants: The Mystery of Mammoths and Mastodons: http://www.indianamuseum.org/exhibits/details/id/278 — on exhibit now through August 17, 2014!

Online Repository of Fossils, Museum of Paleontology, University of Michigan: (which features interactive images of the Buesching mastodon, among many others!) http://umorf.ummp.lsa.umich.edu/wp/

An enormous THANK YOU to Ron Richards for his incredibly generous time, enthusiasm and patience with my many questions!!  An equally enormous thank you to Bruce Williams!

9 thoughts on “Mammoths and Mastodons in Indiana – Part 1”