If you imagine the Great Lakes region over 10,000 years ago, you might see large, hairy beasts with relatively straight tusks grazing around boggy areas or moving within dense forests.  Their fur and overall appearance might cause you to confuse them with woolly mammoths, but these are the mammoths’ shorter, stockier cousins.  And if any of them would let you get close enough to inspect their mouths, you’d see in an instant that their teeth are completely different than those of mammoths.

Whereas mammoths are believed to have eaten grasses and even flowers, mastodons needed teeth suited to the mastication of hardier stuff: shrubs, parts of trees, perhaps pinecones?   Mastodon teeth, with the bumps and ridges one might associate with carnivores, are easily recognizable as ‘teeth.’  Mammoths, in contrast, needed to grind food, producing teeth with spherical lengths of ridges across each tooth. 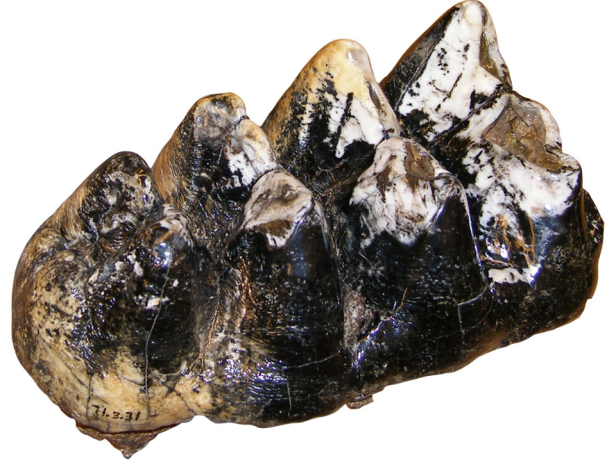 [image courtesy of Ron Richards, Indiana State Museum, for this post: Mammoths and Mastodons in Indiana – Part 1.  Can you tell which tooth belongs to which species?] 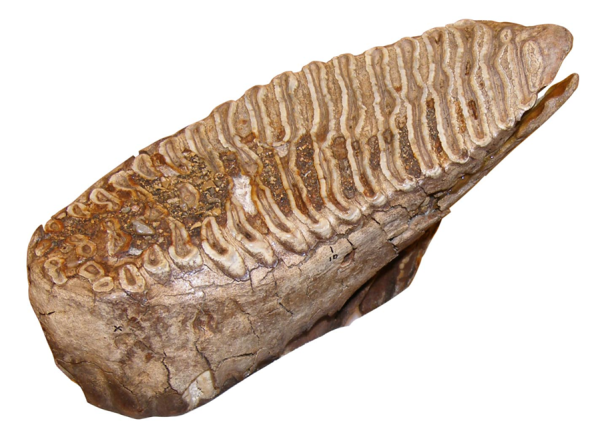 And while woolly mammoths pervade popular culture and interest, there are some, like Dr. Katy Smith, Associate Professor of Geology at Georgia Southern University and Curator of the Georgia Southern Museum, who prefer their lesser-known cousins and have made fascinating contributions to our understanding of them.

Such a unique discovery occurred in 2005, when more than 300 fossils were found in Hebron, Indiana.  Now known as the “Bothwell site,” it was originally going to be the location of the landowner’s pond.  Instead, Indiana State Museum paleobiologist Ron Richards and his crew uncovered bones that included numerous mastodons (Mammut americanum), giant beaver (Castoroides) and hoofed animals with even-toes (artiodactyls). 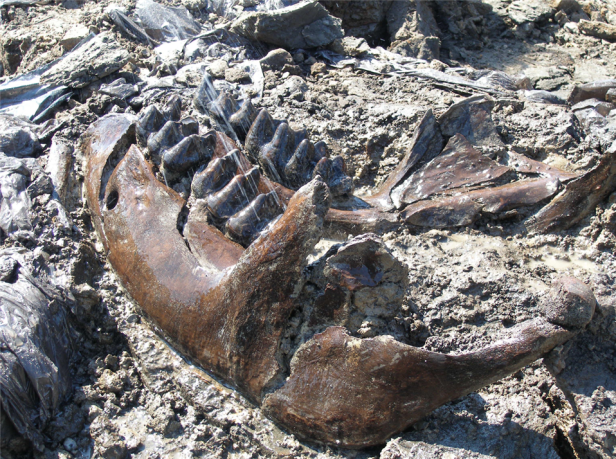 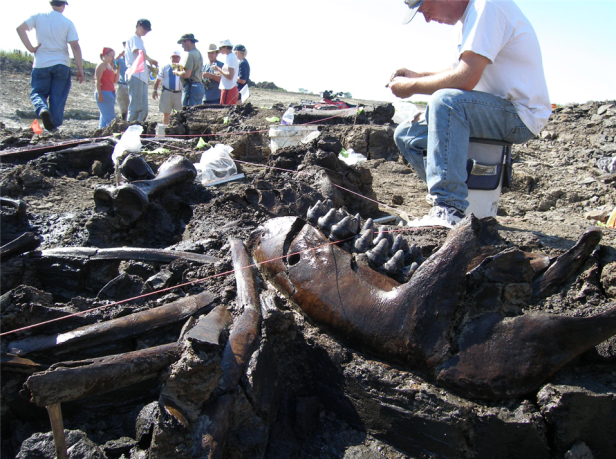 [images of the Bothwell site dig, courtesy of Ron Richards, Indiana State Museum, for this post: Mammoths and Mastodons in Indiana – Part 2.]

Four years later, the Bothwell site became the focus of Katy Smith, her dissertation, and two subsequent papers she co-wrote with Dr. Daniel Fisher at the University of Michigan.

But let’s take a moment to consider what paleontologists uncover. However rudimentary this may seem, it is important to note that bones are generally not discovered in neat order, intact and with each skeletal component attached where it would have been in the life of the animal.

Consider, too, that not all bones survive.  And those that do are often broken or in terrible condition.

So even at a site such as Bothwell, which produced lots of fossils, a paleontologist’s job is no less challenging.  The pieces of information are incomplete, mere clues to the animals that died there.

The questions, however, are profuse.

Why were so many animals found in that one spot?

If, as it is currently debated, mastodons shared behavioral traits with modern-day elephants, was this a family unit?

If so, was this group—like elephants–comprised largely of female and juvenile mastodons?

And why were other unrelated animals discovered among them?

Did a sudden disaster kill them all?  Were humans involved?

Sexual dimorphism is another way of referring to the traits that make an animal either female or male.  Some of us would assume, since mastodon pelvic bones were not among the Bothwell fossil assemblage, that the sex of these animals would remain unknown.

There were 13 mastodon tusks, only four of which were complete. And this, remarkably, is what prompted Katy Smith’s research.

“I wanted to know if I just had tusks, what can I do to figure out if I’m looking at a male or a female,” she explained by phone. 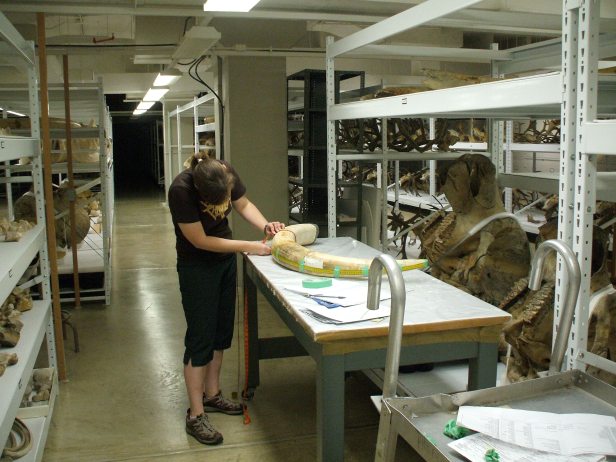 [image of Dr. Katy Smith measuring an African elephant tusk in (what this author believes must be one of the greatest places on earth) the basement and fossil collection of the University of Michigan; courtesy of Dr. Katy Smith]

“Other people have looked at [sexual dimorphism], but I wanted to look at it specifically with the Bothwell mastodons, because they were inferred to be female, and female mastodons are less common in the fossil record than males.

“When I presented preliminary results from my research in a paleontology class, the professor said, ‘Why don’t you try multivariate analysis?’ And it just kind of spiraled from there.”

‘Multivariate analysis,’ as the name implies, means using more than one type of measurement or observation towards a hypothesis.  In other words, rather than simply using size as a determination of sexual dimorphism, applying numerous methods and statistics that support or disprove it.

Already, the amount of information scientists have pulled from tusks alone is fascinating.

Tusks are teeth.  They are described, in Dr. Smith’s dissertation as “hypertrophic incisors.” And, unlike human teeth, they continue to grow the entire life of the animal. So where we can simply look at a human tooth and know immediately whether it is from an adult or a child, the same cannot be done with tusks.

What their hardy structure records includes the age of the animal, growth in winter or summer months each year, their overall diet, and periods of nutritional stress.  (As described in an earlier post, Proboscidean molars can even provide details regarding where they roamed during life.)

But much of this information can only be gleaned from well-preserved, intact tusks, as well as from cutting into and examining their chemical composition.

“If you don’t know what the sex of the animal is before you look at tusk microstructure,” she said, “it can be hard to interpret what you’re looking at.”

Part of what Dr. Smith hoped to discover were similarities in the tusks where sex and age had already been determined.  If certain structural elements were the same across female mastodon tusks, such that they tended to differ from male mastodon tusks, this might help determine sexual dimorphism in future tusk discoveries.

She also hoped to discover any similarities between the tusks of extant elephants and mastodons. 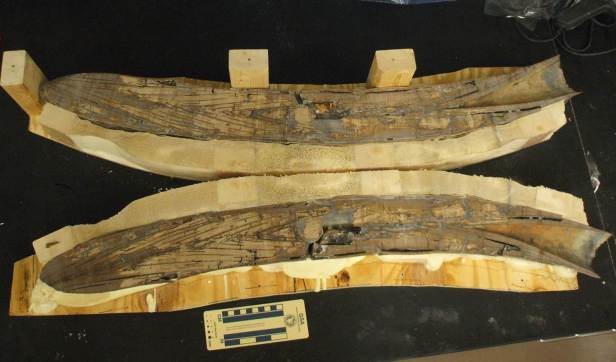 Thus, she studied and measured tusks of both species from numerous museum collections. (Asian elephant tusks were not used, as female elephants of this species tend to have either tiny tusks or no tusks at all.)  She rather amusingly refers to the approximate amount of tusks involved as “5,000 pounds of tusk.”

Her dissertation and the two papers describe the type of analysis performed in detail.  Among them were canonical variates analysis (CVA) and discriminant function analysis (DFA).

“Fortunately, we didn’t have to cut into the tusks to do those measurements. You just insert a stiff wire into the pulp cavity.”

“This is something that we saw in almost every mastodon. So it was kind of cool.”

“If we could have cut every tusk, I would have,” she admitted, and laughed. “But it was a matter of collecting these measurements at different museums. And so I would just go there and collect all of them, and that was how we’d get the pulp cavity depth.”

“I’ve always been interested in paleontology,” she said when I asked her how she got started.

“I’m one of those kids who just never grew out of it. My parents used to take me to the museum all the time, and I used to spend hours and hours staring at the dinosaur dioramas there, just loving it.  I told my kindergarten teacher I wanted to be a paleontologist. I never changed! My 5-year-old self grew up and became a paleontologist.”

But her interests moved away from dinosaurs when she realized that their fossil record in Wisconsin, her home state, was rare to nonexistent.

After all, she said, “I started just wanting to explore what was underneath my feet.”

It wasn’t until grad school at Michigan State, where she met the late Dr. Alan Holman, that she realized her passion for mastodons.  His own interest in the species was infectious, and it was through him that she learned of the numerous mastodon (Mammut americanum) fossil discoveries in the area.

“Wow!” she said, recalling her initial reaction. “There are over 300 mastodons in Michigan. This is exciting!” 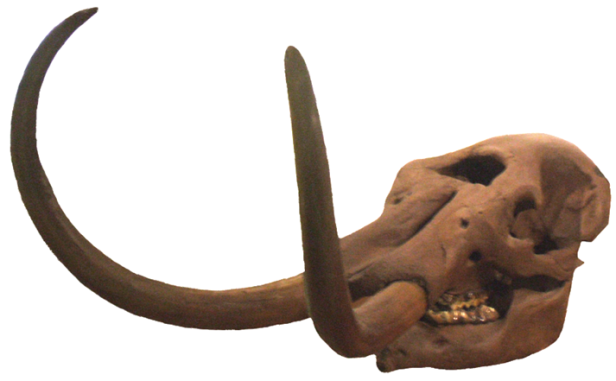 Not surprisingly, she did her PhD work at the University of Michigan, home to Proboscidean expert Dr. Daniel Fisher, who was her advisor.

“I wanted to work with him,” she explained, “because I wanted to continue working on mastodons, and he had a couple of ideas for projects. One of them included this assemblage of mastodons from Indiana, which were—supposedly—all female.”

What she discovered regarding the Bothwell site is both thought-provoking and fascinating:

Based on the evidence provided, Dr. Smith wonders whether these animals were part of a meat cache for humans (members of the Clovis culture) that co-existed at that time.

But perhaps the single most remarkable result of her research is helping other paleontologists–who often have nothing more than a single tusk–determine the sex of that animal using her different types of analysis.

Prior to her dissertation, only one female mastodon tusk had been analyzed for growth rate.  To date, I am unaware of any other publication (paper or book) that helps detail the sexual dimorphism in mastodons by tusks alone.

When I remarked upon this, I asked her if others had cited her work.  Her response, after stating that others had, was equally fascinating to me.

An enormous and sincere THANK YOU to Dr. Katy Smith for her generous and fascinating answers to my many questions, her gracious help when I had trouble understanding certain points, and for being so much fun with whom to connect! I cannot express how much I wish I could attend her classes, nor how fascinating I found her dissertation. I am profoundly grateful that she shared it with me!

A sincere thank you to my Dad, as well, for helping me understand tooth components (i.e.: dentin, cementum)!

**A quick reminder that I am neither a scientist nor a paleontologist, so any errors in this post are my own.

Bothwell Mastodont Dig, courtesy of Indiana State Museum; many thanks to Bruce Williams and Leslie Lorance! 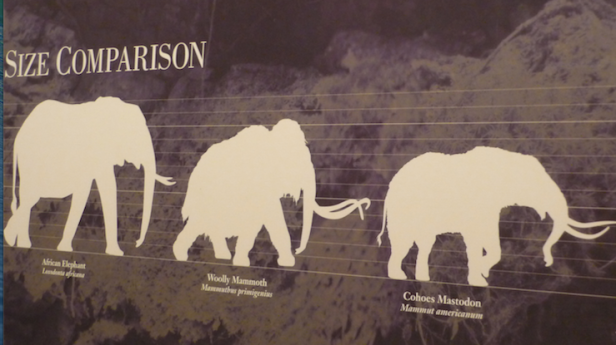 [image of sign in the NY State Museum illustrating the size difference between an extant elephant, a woolly mammoth and the Cohoes mastodon; picture taken by the author]