Mary Anning was only 5 or 6 years old when she started down the path of discovery; Edward Hitchcock was in his late 30’s. Born on different continents 6 years and 3 days apart, both contributed to a world in which science was blossoming in new and exciting directions.

Their lives couldn’t have been more different.

Mary Anning was born May 21, 1799, to Molly and Richard Anning.  She and her older brother, Joseph, were the only children out of ten to survive to adulthood.  They learned from their father how to find fossils along the shore of their home in Lyme Regis, England. Mary accompanied her father on these hunts from age 5 or 6.  She learned how to excavate fossils from the rock, how to polish them, how to sell them to local tourists.

Lyme Regis, Dorset looking along the beach towards Charmouth, with the promenade to the left. The coast contains many fossils in the rocks which draws tourism from around the globe. Photo by Chris Hopkins, courtesy Getty Images. This is where Mary Anning searched for fossils throughout her life.

When she was 11, Mary found her first major discovery: the complete skeleton of the first known ichthyosaur. Her brother had found its skull the year before—the same year that their father died—and she had gone back to excavate further.

Its discovery puzzled scientists at the time. Extinction and evolution were concepts that had yet to be introduced. The first dinosaur, Megolosaurus, would not be named until 13 years later; the actual term ‘dinosaur’ would not appear until 1842.  So this skeleton, with components recognized as those of lizards and fish, was utterly alien to the world. 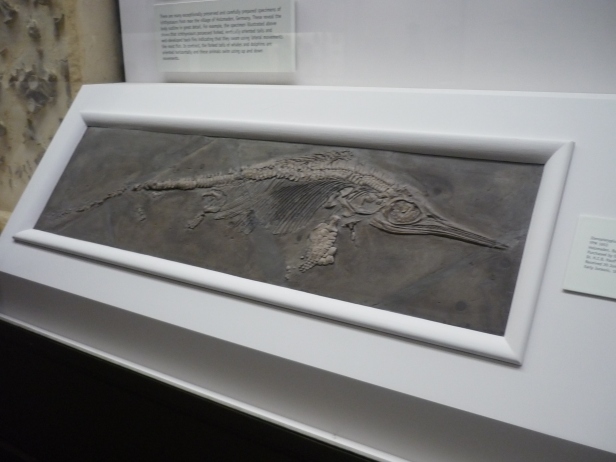 Images of Stenopterygius quadricissus at the Yale Peabody Museum; this is a “thunnosaur ichthyosaur”, as described here at Wikipedia.  In any case, not the exact type of ichthyosaur–a marine reptile that co-existed with dinosaurs–discovered by Mary Anning, but it is something similar. Photos taken by the author.

And it was just one of many new species Mary would go on to discover in her lifetime.

In 1823, she would find the skeleton of what was eventually known as Plesiosaurus giganteus. Five years later, she would find a pterosaur (Dimorphodon).  She discovered a transitional fossil—one that actually demonstrates in its skeleton traits that show it is evolving from one form to another—in 1829. That became known as Squaloraja polyspondyla. In 1830, she found another plesiosaur: Plesiosaurus macrocephalus.  Ultimately, she would also discover 34 new species of ancient fish.  She correctly identified fossilized dung within ichthyosaur skeletons, a type of fossil newly named coprolites and described by William Buckland after discussions with Mary Anning and Gideon Mantell. 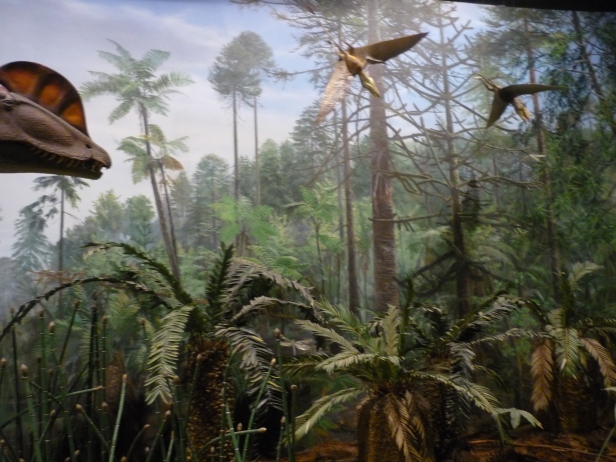 Part of a life-size diorama at Dinosaur State Park, Rocky Hill, CT; replicas of Dimorphodon, a pterosaur discovered by Mary Anning in 1828, can be seen in the top right. Photo taken by the author.

Image of Squaloraja polyspondyla, a type of fossil discovered by Mary Anning in 1829. You can read about this in more detail at the blog Mary Anning’s Revenge here. 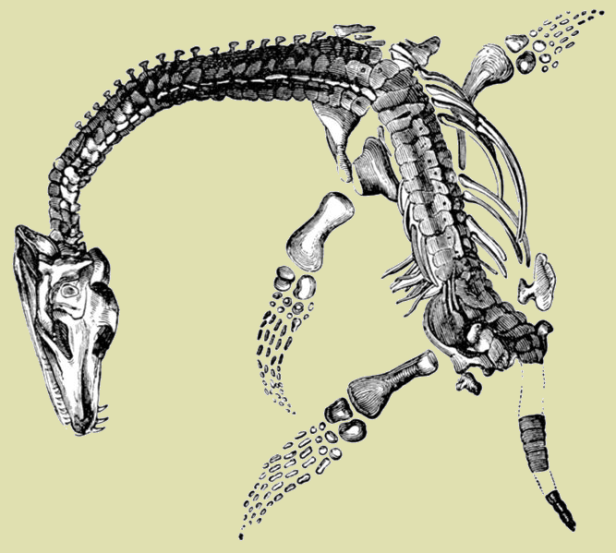 Drawing of Plesiosaurus macrocephalus discovered by Mary Anning in 1830; image courtesy of Brian Switek and Wikipedia.

Images of a polished section of Ichthyosaurus communis vertebrae in a drawer at the Beneski Museum at Amherst College.  Not only does this come from Lyme Regis, but this is the type of Ichthyosaur discovered in 1832. Mary Anning found the skull and was convinced that there was nothing more to be found. Fellow-fossil hunter Thomas Hawkins, however, believed there was more.  She led him to where she’d found the skull, and he and his team did find the rest of the skeleton.  When the skeleton shattered as they moved it, Mary Anning helped Hawkins put it together.

Her discoveries fueled scientific revelations, were studied by the most prominent scientists of the age, and were discussed in the relatively new Geological Society of London.

As a woman, she was never allowed to attend any of their meetings or lectures.  Moreover, she was almost never credited for her remarkable fossil finds.

Her male friends could attend university (as both a woman and a member of the Dissenter religion, this was not an option), join scientific organizations, have papers published, discuss the latest scientific research among peers in professional institutions, travel extensively (without chaperones) and make substantial financial gains in their careers.

Mary’s life was marked by periods of financial gain and of teetering terribly close to financial ruin. She had three years of formal education.  She traveled to London once.

And yet, she constantly persevered. Her work enabled her to buy a home for her family at the age of 27, the first floor of which she created her fossil shop.  Although she was not privy to university resources, she taught herself scientific illustration.  Using marine life from the local beach, she taught herself anatomy through dissection.  She was in communication with and visited by scientists from all of Europe.

In fact, some of the very same people in communication with Edward Hitchcock were communicating with or visiting Mary Anning: Charles Lyell, Roderick Murchison, Richard Owen, Gideon Mantell, and William Buckland.

Across the ocean, Edward Hitchcock was born in Deerfield, Massachusetts on May 24, 1793, several years before Mary Anning was born.  He would also outlive her.  While she died of breast cancer at the age of 47, Edward died at 70.

Had he been African-American (or simply African) in the newly-formed United States or a woman anywhere, his opportunities would have been severely limited, but he was none of those things.  Still, although he hoped to study astronomy at Harvard, he ultimately never attended college.

He did, however, become the first state geologist for Massachusetts in 1830 (the same year Mary made one of her major fossil discoveries).  He created the first geologic map of Massachusetts—only the 2nd ever created in the country—in 1832.  He believed the state exhibited proof of the Great Flood referenced in the Bible; it was later found to be remnants of the Ice Age.

Sign at Dinosaur State Park that offers a brief history of ichnology in New England. Edward Hitchcock is pictured at the very top. Below that, a drawing of the fossil tracks found by Pliny Moody–a name you will see in marble in the “Donors to the Footmarks” frame further below. Photo taken by the author

Remarkably, he believed that women should receive education and learn about science. One of his well-known students was Mary Lyon, a woman who went on to found Mount Holyoke Female Seminary (now known as Mount Holyoke College), among some of the country’s first academic institutions for women. Orra White Hitchcock, who married Edward in 1824, was a prolific artist and scientific illustrator.  She created many of the illustrations he used in his classes.

In 1835, things changed abruptly.  Dr. James Deane, from a nearby town, wrote to Edward about tracks found in stone slabs that were to be used to build a sidewalk.  Edward dismissed their importance until the surgeon sent him plaster casts of the tracks.

Most people referred to these tracks, seen in other local stone slabs, as “turkey tracks”.  Edward believed they were created by birds.  It was a belief he would defend for the rest his life, despite new discoveries that may have indicated otherwise. 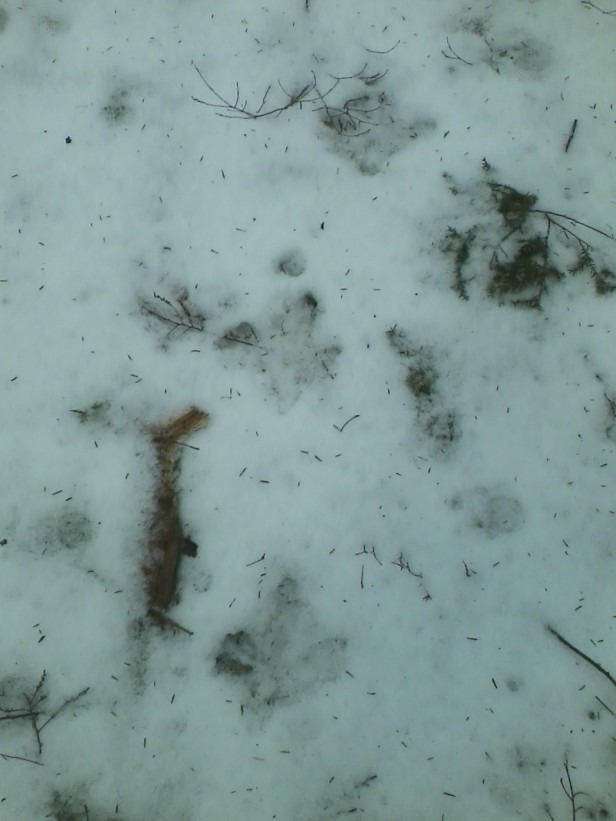 Wild turkey in the Fall, New England; photo taken by the author

In part, his theory made sense.  The tracks looked remarkably similar to the familiar tracks of extant turkeys, and fossils of any ancient creatures responsible for the tracks in stone were not found.  New England, with its acidic conditions and lack of fossil-preserving stone, is not fossil-friendly.

Edward created a new science he named “ornithichnology,” a name that references birds, but was later shortened to just “ichnology” by William Buckland.

Images of the first documented fossil footprints, discovered in 1802, displayed at the Beneski Museum at Amherst College, part of the Hitchcock collection. Photos taken by the author

Fossil tracks displayed at the Beneski Museum at Amherst College. According to Window into the Jurassic World by Nicholas G. McDonald, these tracks were the “gem” of Hitchcock’s collection (pg. 58, Figure 6-8). This slab was originally used as paving. Photo taken by the author (of this blog)

While major discoveries of reptiles and dinosaurs were starting to pepper European science, Edward continued studying fossil tracks and traces.  He wrote about his work and his theory to the men on the forefront of these discoveries (as mentioned earlier, women were not allowed or, apparently, credited). He began publishing books and submitted papers to the Yale American Journal of Science.

Richard Owen disagreed with Edward’s findings at first.  He would eventually change his mind after describing an extinct bird in 1939 (the ‘moa’ of New Zealand).  In 1841, Charles Lyell actually visited Edward and became a prominent supporter.

Although Mary Anning discovered and identified coprolites more than 15 years earlier, Edward discovered these fossils in 1844 in Chicopee Falls, Massachusetts.

Coprolites displayed in a drawer at the Beneski Museum at Amherst College.  These are not necessarily those discovered by Edward Hitchcock in 1944. Photo by the author

He maintained that these fossil tracks were made by birds, and his work was heavily influenced by his desire to find proof of God in nature. In his own words, he taught “natural theology.”

The book Ichnology of New England, written by Edward Hitchcock in 1858; copy displayed at Dinosaur State Park. Photo taken by the author 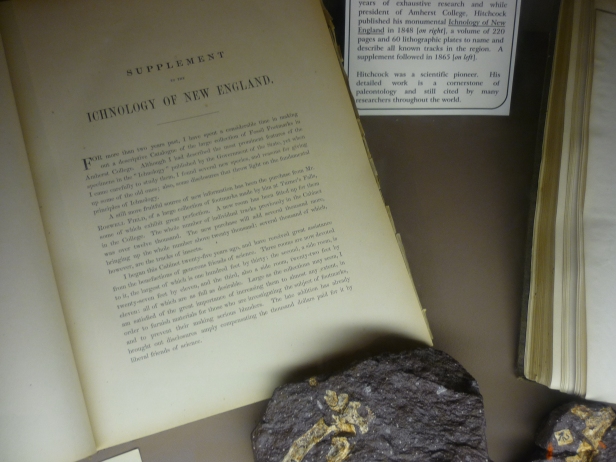 The Supplement to the Ichnology of New England, written by Edward Hitchcock but published posthumously in 1865; copy displayed at Dinosaur State Park. Photo taken by the author

Framed marble sign highlighting donors and the amount donated; displayed at the Beneski Museum at Amherst College; photo taken by the author

His efforts as college president in the 1840’s prevented the closure of Amherst College.  One of his particularly successful years was the same year that Mary Anning passed away, 1847.

Today, his vast collection–thousands of fossil footprints and traces–reside in the elegant Beneski Museum of Natural History.  We are extremely fortunate, as Edward Hitchcock made it very clear he did not want his collection owned by anyone who did not share his evangelical Christian views.  Although the college moved to a more secular philosophy, his family did not honor this request.

A small section of the Hitchcock collection of fossil tracks and traces at the Beneski Museum of Natural History at Amherst College.  This author encourages anyone interested to visit this amazing museum. Photo by the author

Did Mary Anning and Edward Hitchcock know of each other across the Atlantic?  Did their names or their work ever come up in conversation? Did their mutual friends in science discuss them with the other?

There is no evidence to suggest this.

But the world would be increasingly changed thanks to their contributions, their dedication and their lifelong efforts.

“Mary Anning painting” Credited to ‘Mr. Grey’ in Crispin Tickell’s book ‘Mary Anning of Lyme Regis’ (1996) – Two versions side by side, Sedgwick Museum. According to the Sedgwick Museum, there are two versions. The earlier version is by an unknown artist, dated before 1842 and credited to the Geological Society. The later version is a copy by B.J. M. Donne in 1847 or 1850, and is credited to the Natural History Museum in London. Licensed under Public Domain via Commons.