Following my last post, I wanted to include some pictures of the “Valley of the Mastodons” workshop and exhibit, including tweets leading up to and during the event. (You can see a lot more on Twitter by searching on the hashtag #ValleyoftheMastodons — no Twitter account needed to do this.) These are just some highlights.

Kathleen Springer and Eric Scott – our heroes! – the two paleontologists who worked for a decade on the Diamond Valley Lake excavations (7 years of digging; 3 years of research), producing 100,000 fossils now housed in the Western Science Center. Their work not only populates the Hemet, CA museum, it also helped prompt the “Valley of the Mastodons” event – an opportunity for paleontologists to study these largely unstudied fossils (over 600 of which are mastodons!)

Dr. Brett Dooley doing research in advance of the event.

Below, the amazing staff at the Western Science Center get the exhibit space ready with an incredible mural done by Brian Engh.

Most of the event participants had connected in some way (by Twitter, by work or by research), but most of us hadn’t met in person.  Dr. Bernard K. Means (Virginia) and Dr. Grant Zazula (Yukon, Canada) were the first to arrive.

The rest of us trickled in throughout the next day or so.  At each layover, I checked Twitter–eager to see who had arrived, what was going on. 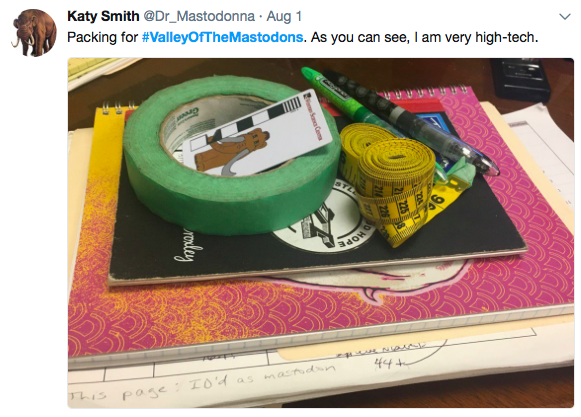 Taken upon my arrival at the airport in California, where the first person I met was Dr. Jeremy Green (Ohio) followed by Dr. Brett Dooley (Hemet, CA), who graciously drove us the hour + back to where we were staying.

Where we were housed during the event.  These were described as “cabins”, and as such, I anticipated bunk beds, shared space, community rooms and rustic accommodations.  Wow, was I wrong! Separate cabins (mini-homes) with air-conditioning, wifi, comfortable beds…..

One of the many rabbits that could be seen in the area — day or night — as shown in Alton’s tweet below.

One of the first things I saw when I stepped out of the car at the Western Science Center. (Snakes. Why’d it have to be snakes?) Despite the many signs wherever we went, I saw exactly zero snakes.

Quick shot taken outside the museum on the first morning there.  The clouds are misleading; rain is rare in the area.

Shot taken looking out from the museum.

Some of the many mountains surrounding the museum.

The museum displays — designed by Kathleen Springer, Eric Scott and a design team — are GORGEOUS, and particularly helpful for those of us who aren’t yet able to tell which bone goes where (outside the biggest ones).  That’s Xena, a Columbian mammoth.  Beyond her is a huge fossil sloth. 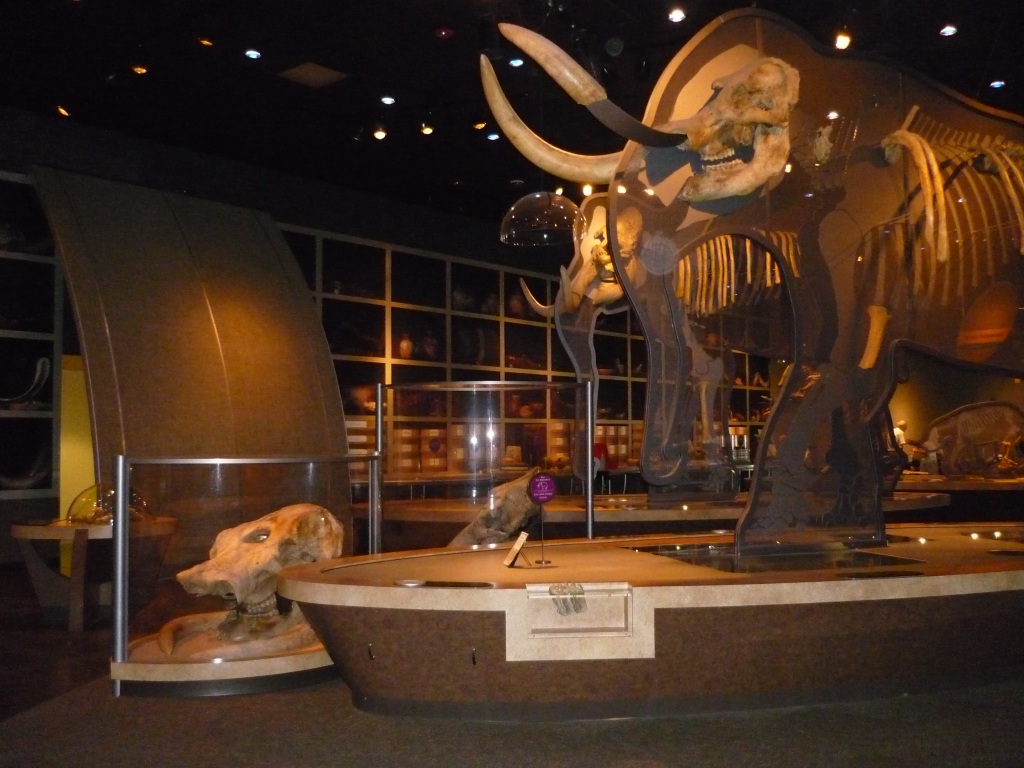 In front is Max, the iconic and very large mastodon at the Western Science Center, alongside Xena. 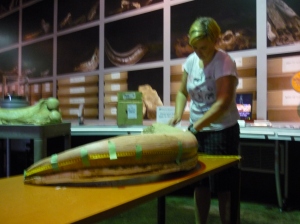 Downsized this image because it is blurry, but HERE is the reason for the green tape Katy packed (in tweet above).

Another image of Katy at work.

Grant working on mastodon molars he brought from the Yukon.

Jeremy working on a tusk. 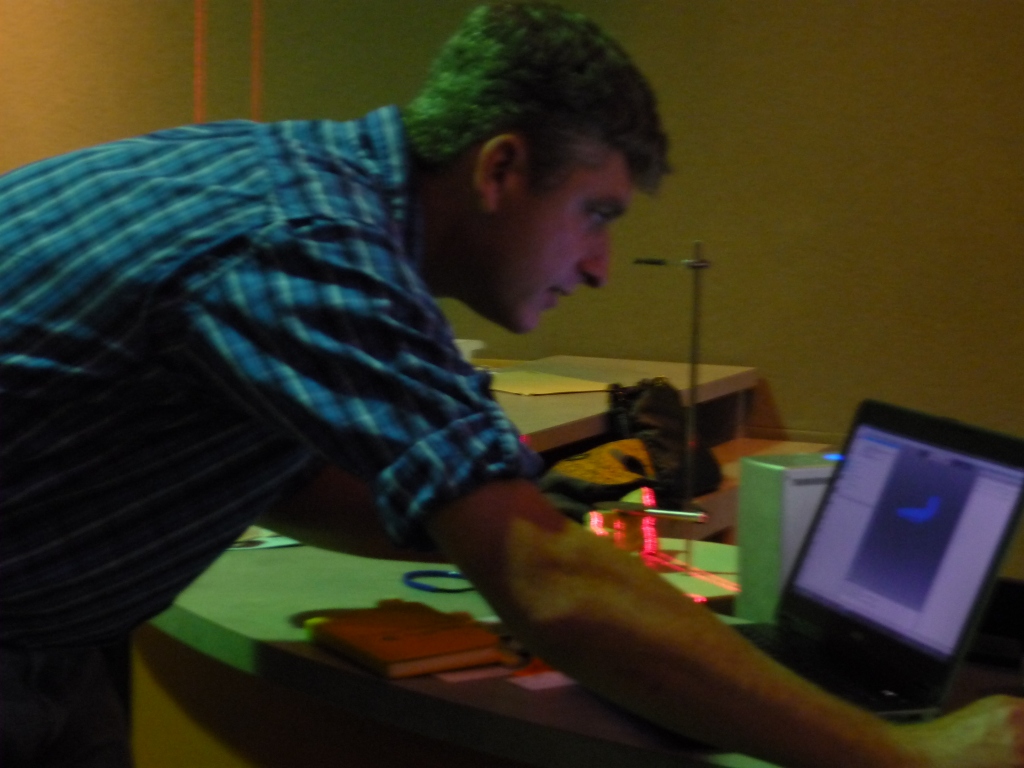 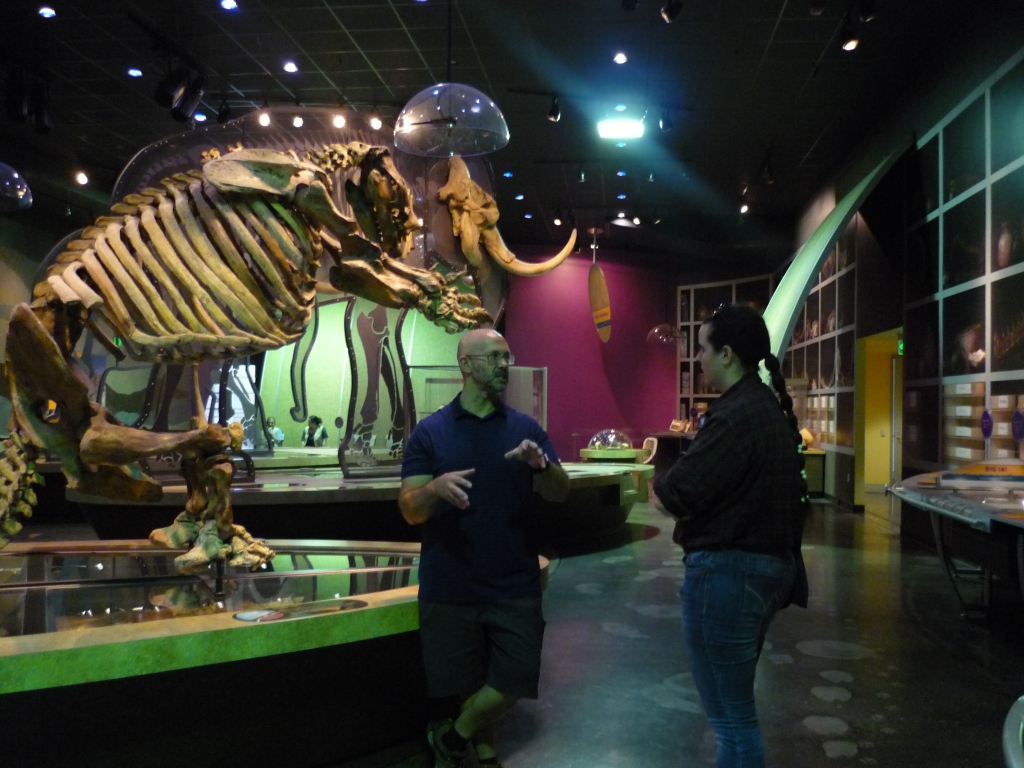 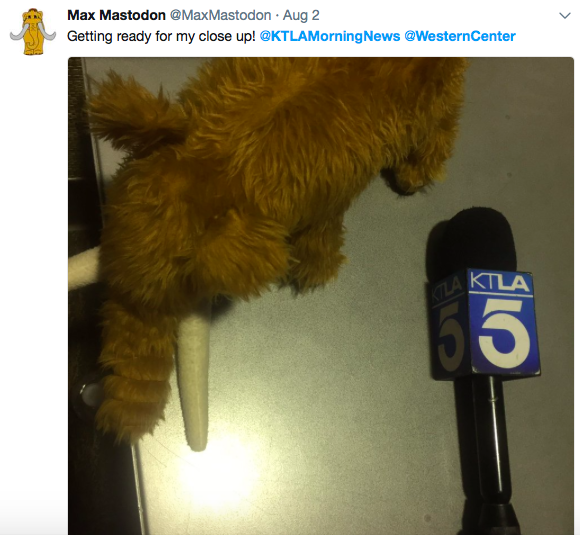 You can check out the videos here: http://ktla.com/2017/08/02/valley-of-the-mastodons-exhibit-at-the-western-science-center/

2 thoughts on “Valley of the Mastodons (initial pictorial interlude)”