We could hear singing and playful shouting from the bus in front of us.  Those of us in the car behind them—a much smaller vehicle carrying an apparently more sedate group–looked at each other and started laughing.  We’d parked briefly at the edge of an enormous grapefruit orchard, its rows of trees mostly silhouettes and shadows against the moonlight.  A few people jumped out to pick grapefruit (someone knew the orchard owner; this was encouraged). And one person burst into a loud rendition of ‘O, Canada!’ somewhere in the darkness amongst the trees. 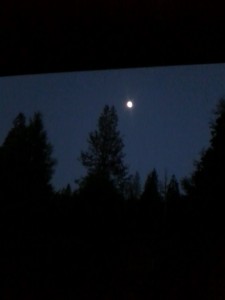 (Moon over cedars in Idyllwild–the view from my seat in the open-air seating of the Brew Pub we were visiting; image taken with my crappy cellphone)

Our jovial group was on its way back from a trip up in the mountains to Idyllwild, a beautiful little town that lived up to its name. Everything was quaint and rustic, nestled amongst giant cedars.  Getting there meant leaving the valley where the Western Science Center resides—a flat expanse of land—and then driving up narrow roads that twist as they go higher and loop back and up and around in ways that cause one to simultaneously appreciate the views and feel vaguely car-sick.

Along the way, Alton and Brett (Dooley) pointed out a specific plant dotting the landscape around us—one of the very plants depicted in the mural by paleoartist Brian Engh now hanging in the museum.

(The mural now hanging in the Western Science Center by Brian Engh; screenshot from his website: Dontmesswithdinosaurs.com) 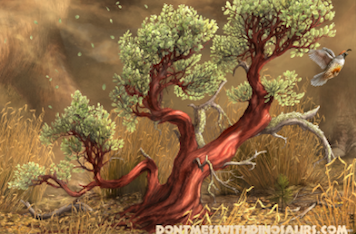 (Screenshot of the lower right corner, highlighting the plant that still grows in the San Jacinto mountain area)

I knew his artwork was based on the fossil record of the Diamond Valley Lake Local Fauna, but I didn’t realize this plant existed today.  Something about that seemed marvelous to me: that here was a plant whose ancestors lived when Pleistocene animals roamed the area.  A species that survived when so many others didn’t; a connection to life thousands of years ago.

Brian’s mural depicts what might have occurred to Max, the nickname for the enormous mastodon at the Western Science Center, and only one part of the 689 mastodon fossils recovered by Kathleen Springer, Eric Scott and their team in the 1990s.  Injuries on Max’s jaw prompted Brian to research how modern bull elephants might receive similar wounds.  This depiction of two male mastodons engaged in combat–surrounded by plants, insects, birds and amphibians matching the fossil record of the area–is the result. 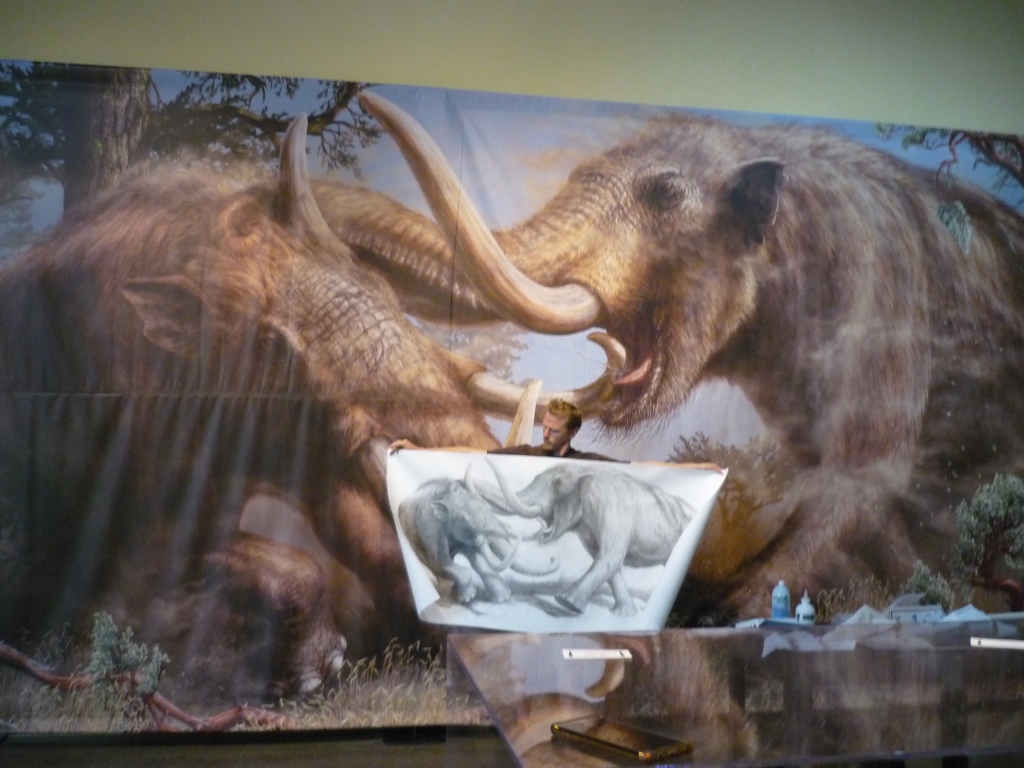 (Picture of Brian Engh with his original artwork in front of the mural at the Western Science Center, photo by Jeanne Timmons)

Twelve or so partial skeletons of mastodons went on display in the “Valley of the Mastodons” exhibit following the three-day workshop hosted by the museum. Many exhibits may have put the fossils into body displays—illustrating what each animal may have looked like as a complete skeleton.  The Western Science Center, however, kept the fossils in their jackets – offering visitors another peek into paleontological work.  Illustrations of a mastodon skeleton—the specific bones in that fossil jacket highlighted—appear above each fossil, along with where in Diamond Valley Lake it was found and what year.  Next to that, each fossil has a white board, where scientists at the workshop posed a question or highlighted their observations after studying the fossils. 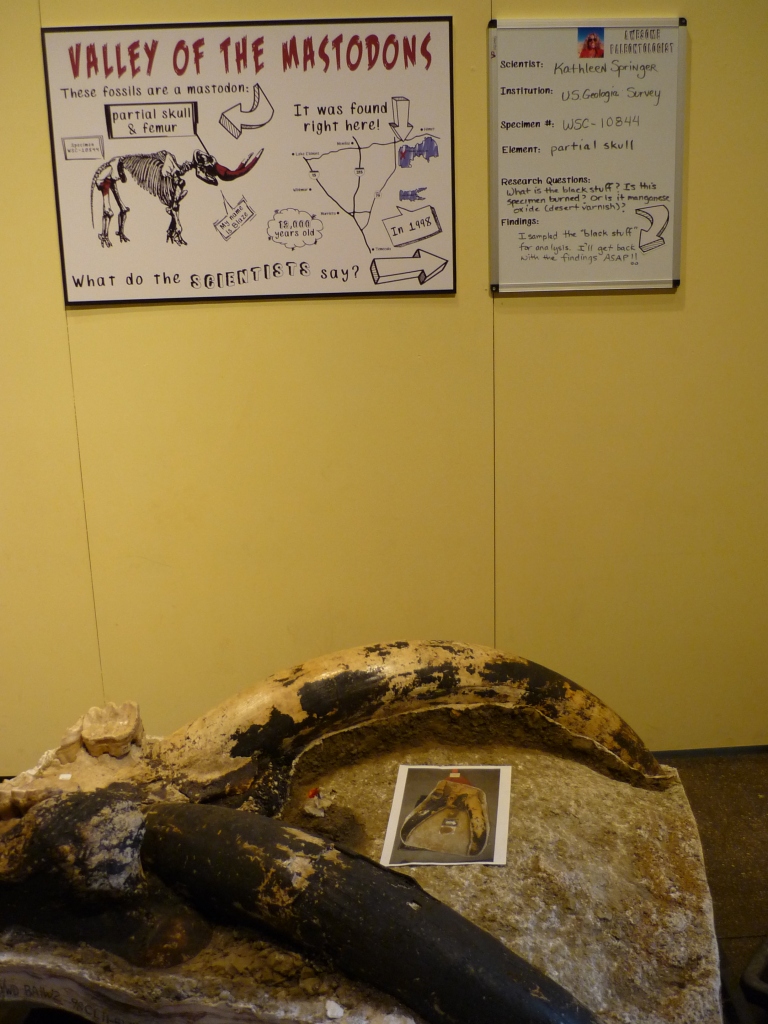 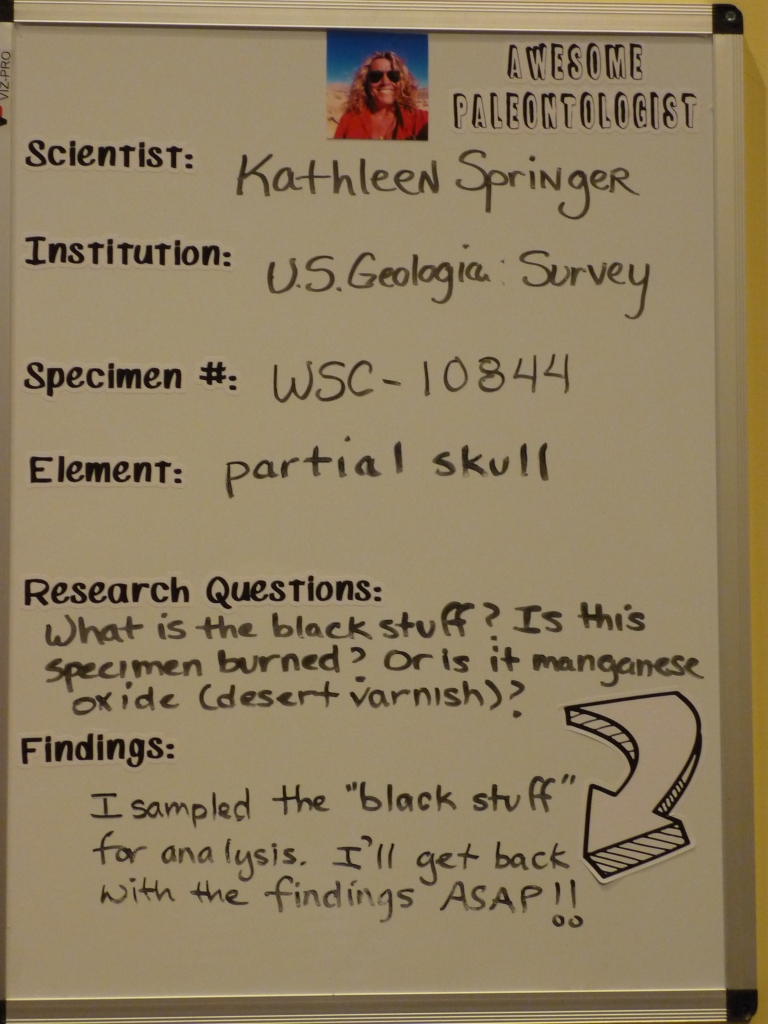 (Images of one particular mastodon fossil still in its jacket, the display text above it detailing what part of mastodon anatomy is seen here and where it was found, and Kathleen Springer’s notes on it; photos by Jeanne Timmons) 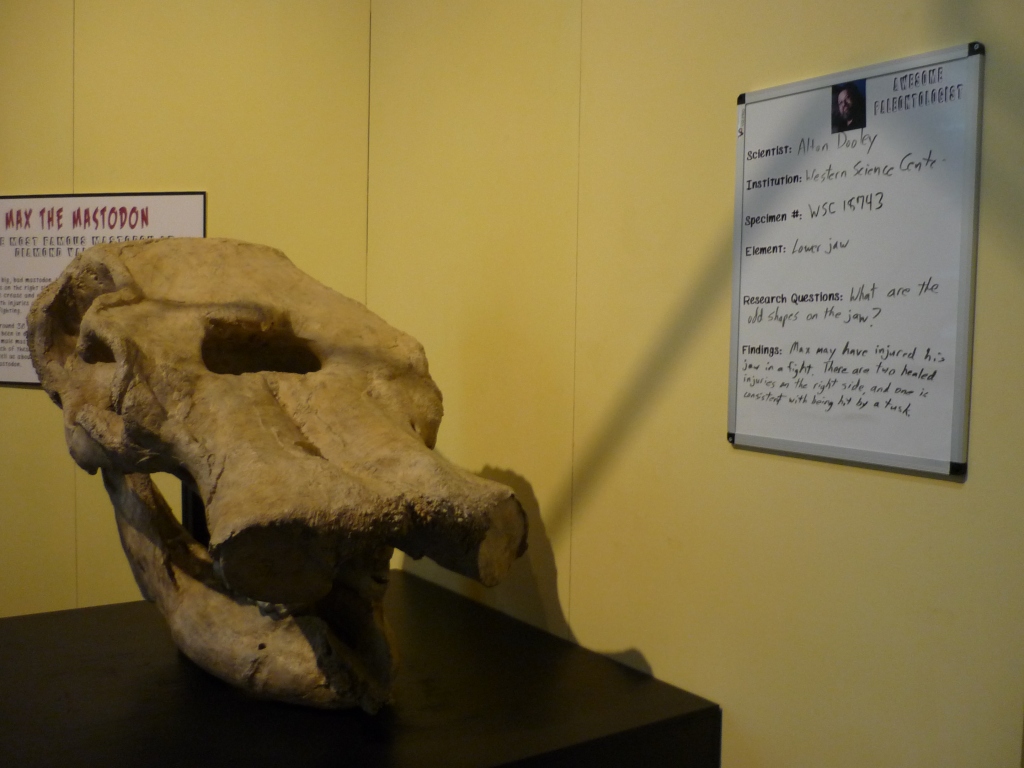 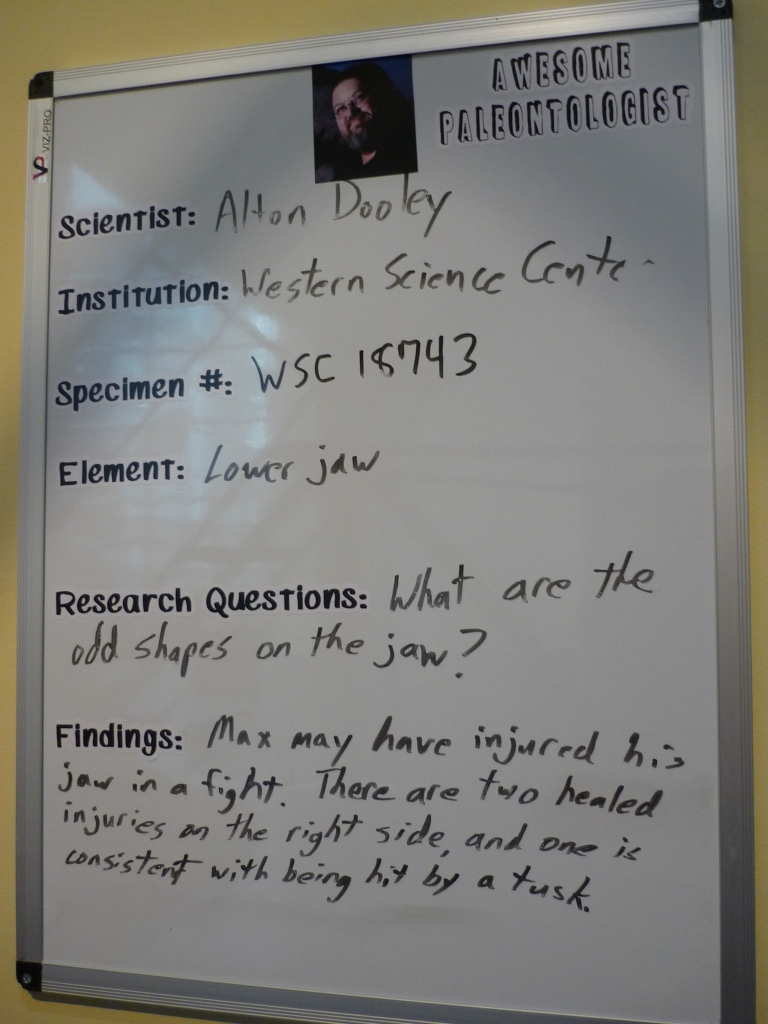 (Images of a cast of Max’s skull and Dr. Alton Dooley jr’s notes on it; photos by Jeanne Timmons)

“I think it’s really fun to talk to ANYBODY about mastodons or paleontology,” Katy (Smith) explained in a phone interview prior to the event.

This sentiment seems to encapsulate the enthusiasm I witnessed by all of the scientists attending.

“’Valley of the Mastodons’ was a very new experience for me! I’ve been to lots of classic conferences, but never one that was this open to the community,” wrote Ashley (Leger) in an email. “I’ve also never put together a new exhibit during a conference!!  Having real-world paleontologists available to interact with museum-goers of all walks of life was really interesting!  I thought we got to meet a lot of wonderful folks, talk about things that interest us, and give them a whole new take on their museum.  Anyone can go to a museum and read the signage, but not everyone can ask a scientist a question and get an answer immediately.”

(Dr. Ashley Leger answering questions of a very engaged group of museum visitors on opening night of the exhibit; photo by Jeanne Timmons)

“I think what transpired on Aug 2-4, 2017 at the Western Science Center is just incredible,” Kathleen (Springer) wrote.

As mentioned earlier, Kathleen and Eric (Scott) lead a team of volunteers over 7 years of excavations in the Diamond Valley Lake area.  Before construction even began on the human-made reservoir, Kathleen maintained that fossils would be profuse at the depths they intended to dig.  This was in direct opposition to the view held by the paleontologist initially hired for the job. When digging began and bones began surfacing, however, Kathleen and her team were hired.

“The whole reason we have that collection in that museum is because she knows her geology,” Eric said in a phone interview.

“Throughout that project,” he continued, “Kathleen, and to some extent, I had to keep reminding them, ‘if you’re digging, you’re going to find [fossils].’ I don’t know [if] they didn’t want to hear it, but they had to keep being…” Here, he paused as if searching for the right word. “…encouraged. They just didn’t get the geology, even when she told them. They just kept thinking ‘this is a one-off. Or maybe a two-off.  But we can’t keep hitting this stuff, right?’ And the answer is: yes, you can.” 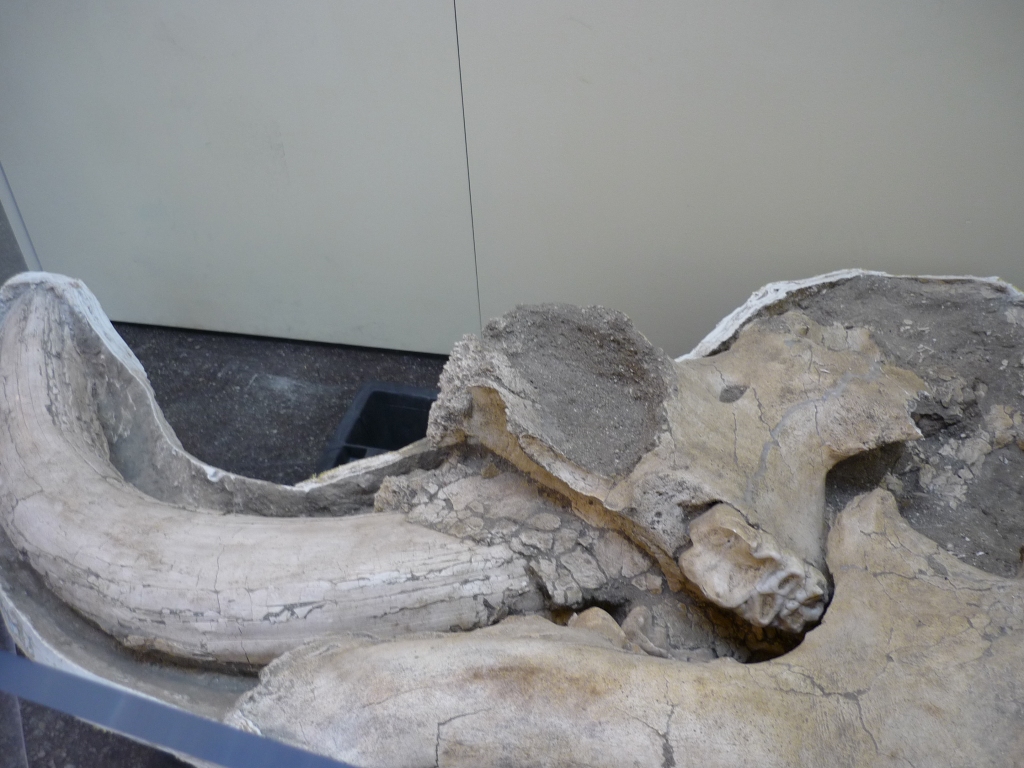 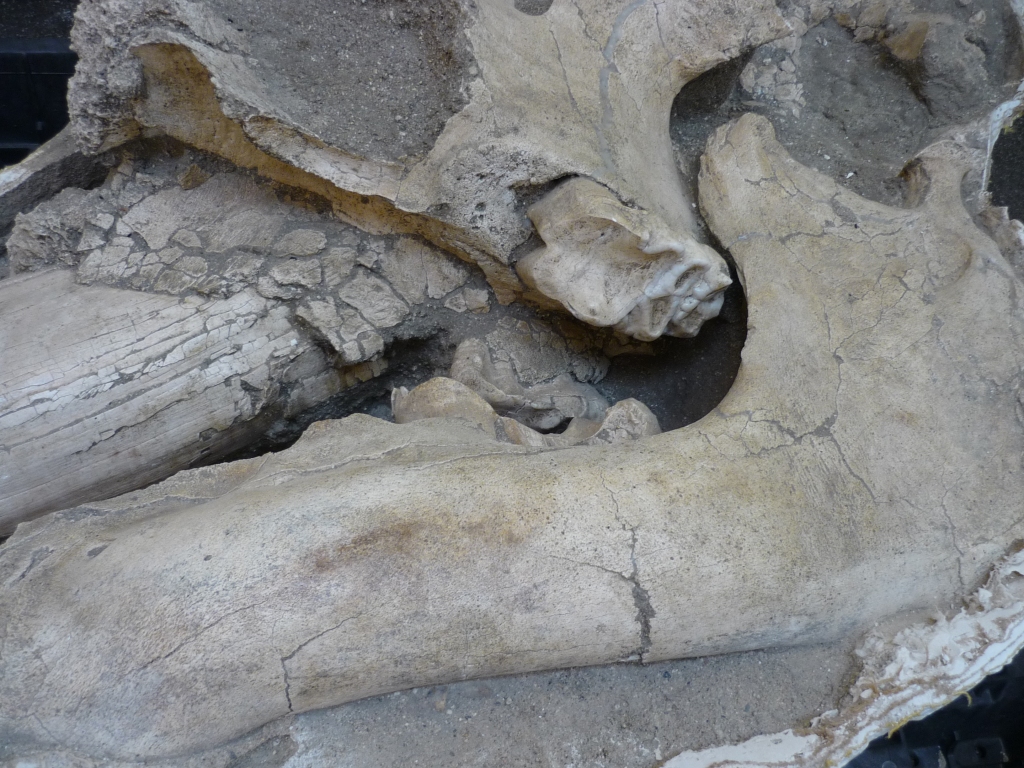 (Details of one of the mastodon fossils — in this case skull and tusk — in the exhibit.  None of these fossils have been on display since their discovery in the 1990s by Kathleen Springer, Eric Scott and team; photos by Jeanne Timmons.)

Understanding the amount of work and time Kathleen and Eric put into uncovering and caring for the 100,000 fossils now at the museum, as well as knowing that this Pleistocene treasure had been largely unstudied, Kathleen’s enthusiasm for the workshop and event is significant.

“An amazing assemblage of paleontologists came together to talk and study mastodons,” she wrote. “That combined with the ‘Valley of the Mastodons’ exhibit, and the public interaction that ensued, was just fantastic. So much collegial dialogue occurred during and has continued since.”

“I’m happy [the fossils are] in such a beautiful place,” she said, “and they’re curated so wonderfully.” 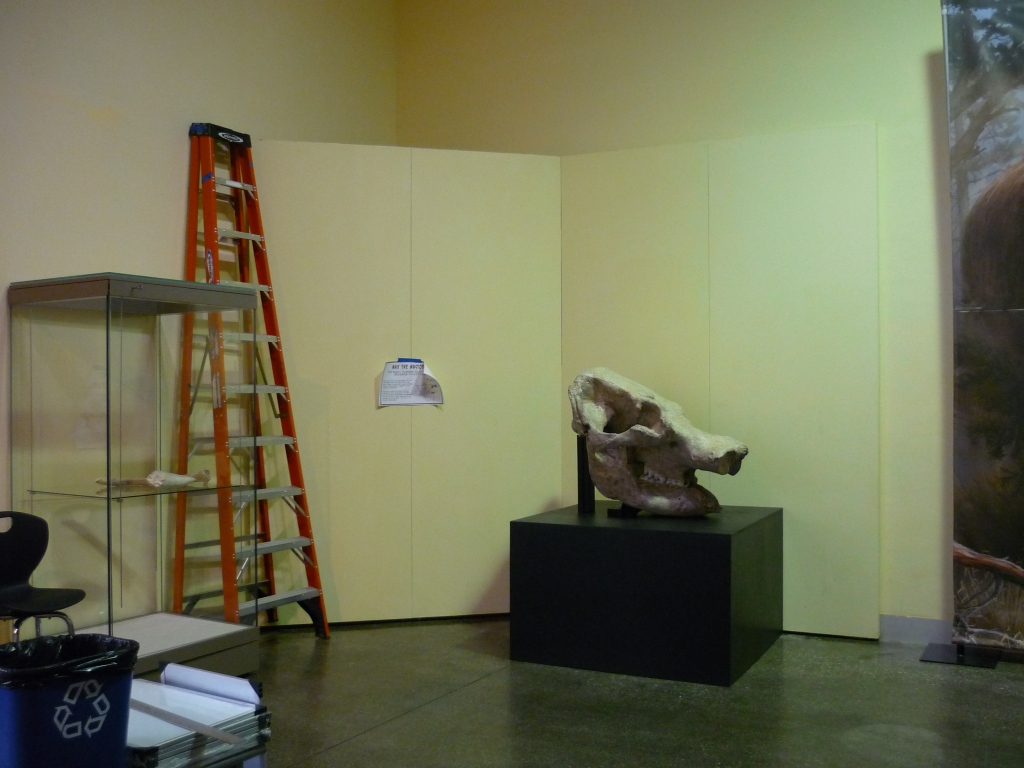 (Image of part of the exhibit space before it was open to the public and before most of the displays were hung; photo by Jeanne Timmons.)