Dr. Advait Jukar–Deep Time – Peter Buck Fellow at the Smithsonian Institute–wants to really understand ancient ecosystems in South Asia, but doing so means beginning with some of the very basics. Challenges include not just a lack of available fossils from the region, but also the lack of detailed records from early paleontologists and a dearth of contemporary research.

He is, in a sense, an explorer.  (All paleontologists are.)  If we think of paleontology as a sculpture in progress, many scientists are working on the fine details.  Dr. Jukar, on the other hand, has the clay and the tools, but the sculpture itself hasn’t even begun to take form.

Consider what he has to work with: isolated proboscidean teeth and skulls, for example, collected by Hugh Falconer and his crew in the early 1800s.  They didn’t record where the bones were found, let alone where each fossil was in relation to the other.  Those who later described these fossils made dubious claims regarding the species.  And few people to this day have revisited this data or expanded upon it. 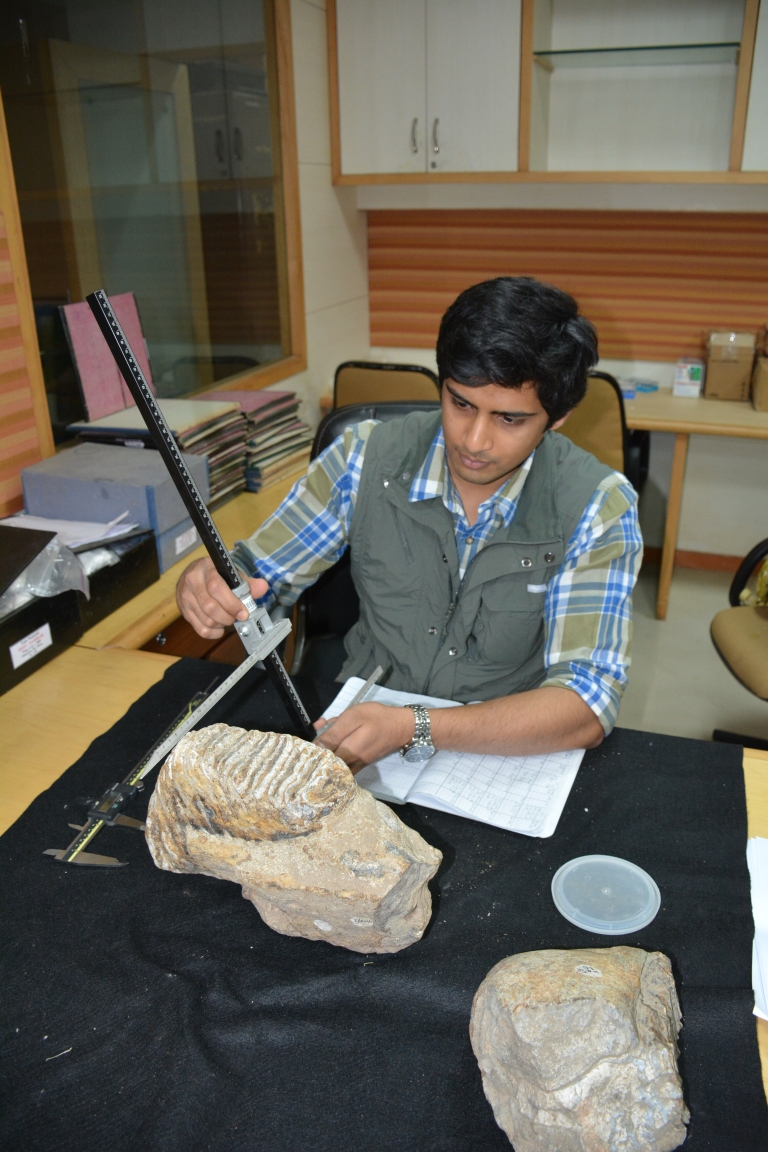 Image of Dr. Advait Jukar at work with an Elephas hysudricus molar; courtesy of Dr. Jukar

Compare this to Maiasaura fossils in the Northwest US.  So many fossils of this species have been excavated that Dr. Holly Woodward Ballard has created the Maiasaura Life History Project.  Its goal is to uncover more details about this particular species than any other currently known extinct creature.  She has a wealth of data at her disposal. Unlike Dr. Jukar, the fossils she can study have been found fairly well articulated, very well documented, and in remarkable abundance.  There are adults, sub-adults, juveniles and embryos.  She and her colleagues are able to add to existing scientific literature using the latest technology.  It’s an exciting project with absolutely fascinating possibilities. 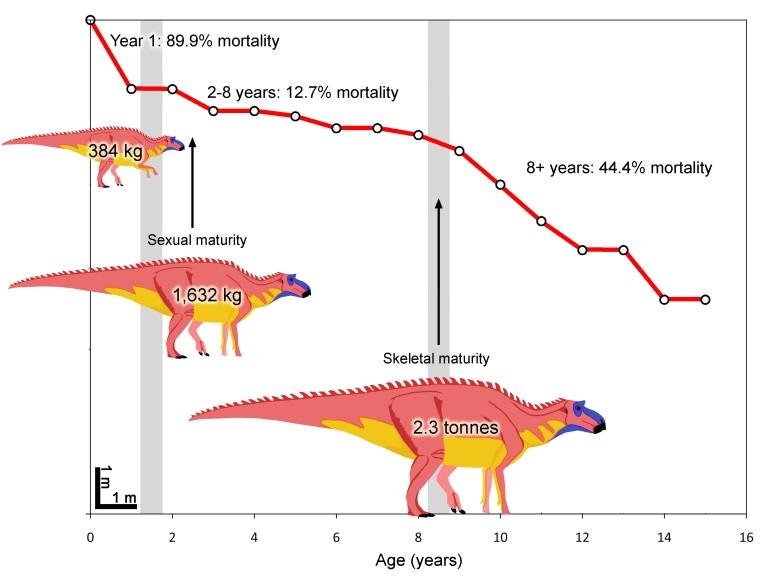 FIGURE 6. Survivorship curve for Maiasaura. Sample size of 50 tibiae was standardized to an initial cohort of 1000 individuals (assumes 0% neonate mortality). Survivorship is based on the number of individuals surviving to reach age x (the end of the growth hiatus marked by LAG x). Age at death for individuals over 1 year old was determined by the number of LAGs plus growth marks within the EFS, when present. Error bars represent 95% confidence interval. Mean annual mortality rates (μ^) given for age ranges 0–1 years, 2–8 years, and 9–15 years. Vertical gray bars visually separate the three mortality rate age ranges; courtesy Dr. Woodward Ballard for this post.

But so, too, is Dr. Jukar’s intended research.   Focusing on the tail end of the Neogene, about 4 million years ago, through the Quaternary, he wants to understand herbivorous mammals—their community, their ecology, their biogeography.  It’s just a question of building the necessary foundation first.

“I started to compile all of these species lists,” he explained by phone, “and saw that there were lots of species of proboscideans in South Asia during that period of time.  We have gomphotheres; we have stegodons; we have elephants.”

One way to understand an animal’s impact on its environment is to assess its body mass.  How big (or small) were these animals?  And therefore, how much did they need to eat?  A larger animal would presumably need to eat a larger amount of vegetation.  Similarly, a larger animal might reproduce less frequently than smaller animals.  Body mass reveals clues about how an animal fits into the ecosystem.

However, he continued, “I hit a wall because there was no way for me to estimate how big these elephants were.  The problem was they were largely known either from skulls or teeth, and the traditional methods to estimate the weight of an extinct elephant were using shoulder height or the length and circumference of the long bones. So if I have a skull but I don’t have long bones, I’m sort of in a bind, because now I can’t estimate how much this animal weighed when it was alive.”

He looked to methods that others have used in the past. One method used by his colleagues at Howard University seemed to be a promising fit.  They used the occipital condyle breadth of seacows—a proboscidean relative–as an indicator for body mass.  Dr. Jukar’s PhD advisor, Mark Uhen, mentioned that this method had also been used on yet another large mammal: the whale.

The occipital condyle is a bone found at the base of the back of the skull, connecting the skull to the spinal column.  It’s a relatively small bone.  Why would this have an impact on determining body mass? 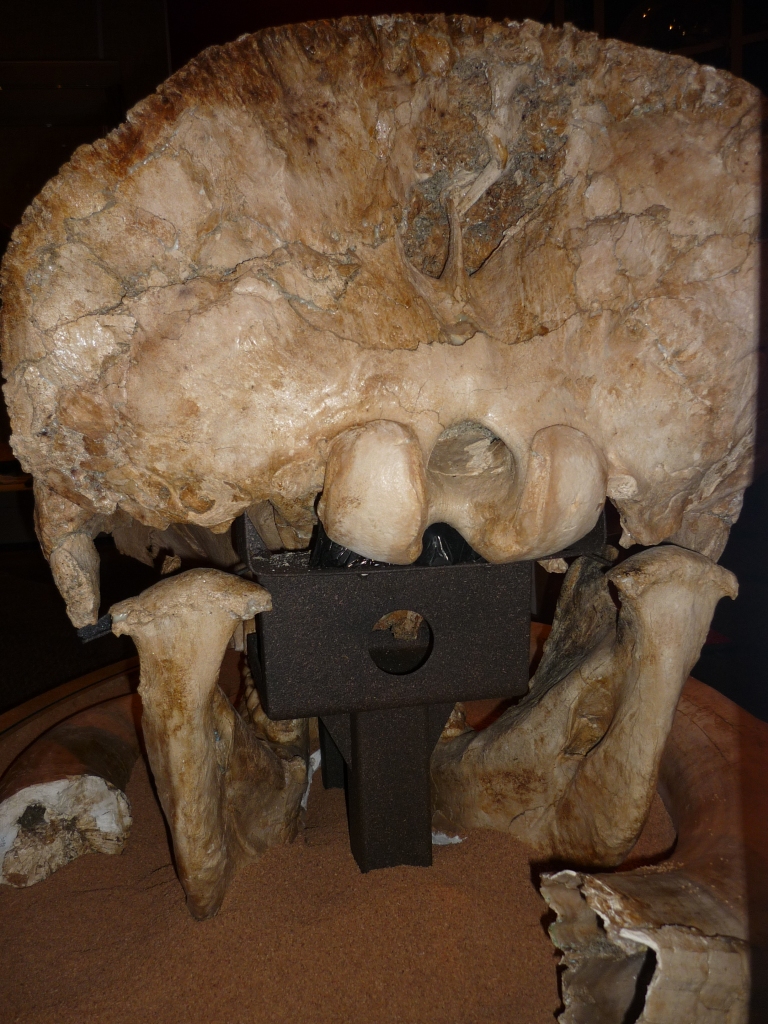 Image of the back of a mastodon (nicknamed ‘Max’) skull at the Western Science Center in California displaying the occipital condyle bone resting on the metal stand; photo taken by Jeanne Timmons

In other words, if a paleontologist has but one skull of an extinct proboscidean and no other related fossils, can that person measure the breadth of the occipital condyle as a way to determine the size and weight of that animal?

To test this theory on proboscideans, he researched available scientific literature and visited a number of museum collections.  Ultimately, he and his two co-authors, S. Kathleen Lyons and Mark Uhen, compared the occipital condyle breadth to the length and circumference of leg bones within extant elephants and extinct relatives.  Two elephant species were studied, as were six gomphotheres, three mastodons and one stegodon. 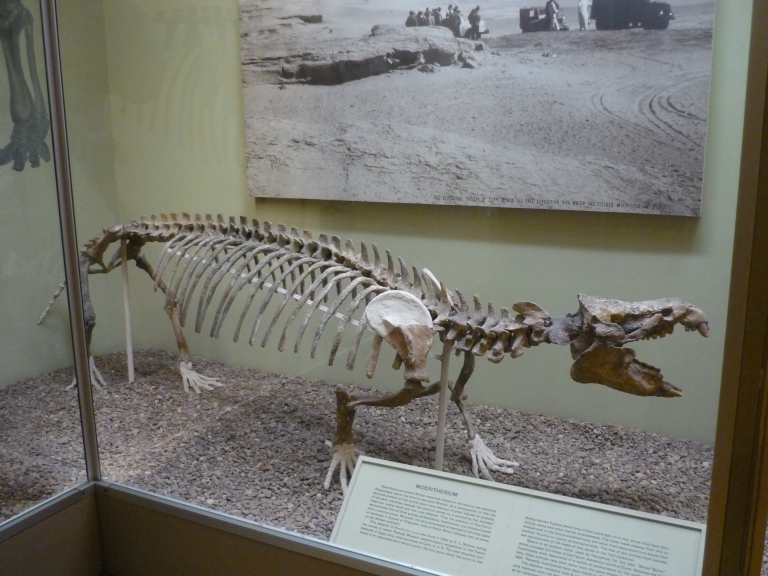 Image of a fossil Moeritherium at the Yale Peabody Museum; photo taken by Jeanne Timmons

While careful to note that this method has its limitations, the results were promising.  The equations are different for each proboscidean family (gomphothere body structure and size is not the same as that of a mastodon) and they do not work for some of the smaller proboscidean species, such as Moeritherium.  In layperson’s terms, this research works for taller, lumbering proboscideans, not those with much shorter limbs and a perhaps waddling gait. Their paper and its results were published in the Zoological Journal of the Linnean Society: A cranial correlate of body mass in proboscideans.

This, though, is just the tip of the iceberg in terms of Dr. Jukar’s research.  An enormous collection of fossils from India resides in the Natural History Museum of London.  Found in an area referred to as the Siwalik Hills (or the “Siwaliks”) at the base of the Himalayas, Scottish paleontologist Hugh Falconer and his team collected them in the 1800s.  Among them are several stegodon teeth and skulls.

The two species of stegodon excavated from the Siwaliks are, to this date, known as Stegodon insignis and Stegodon ganesa.  The species have very similar teeth, but their skulls seem to differ greatly.  The skull of S. insignis, according to Dr. Jukar, is “almost triangular in shape with relatively small tusks,” which Falconer chalked up to sexual dimorphism.

“Which I just thought was the weirdest thing to ever say about stegodons because the skulls are clearly different. They’re clearly not sexually dimorphic.”

Moreover, there seems to be confusion regarding which fossils Falconer assigned to which stegodon species that continues to this day.

“So what was going on in his mind? I have no idea.  It’s a problem! Because since then, people have said that both of these must be the same species without really truly investigating them.

And here Dr. Jukar was emphatic: “You CANNOT do that with the taxonomic code.”

“And that was Osborn’s fault.”

He was referring to Henry Fairfield Osborn, former professor then curator of the American Museum of Natural History in the late 1800s.

“Osborn [is known to have asserted], ‘I agree with what Falconer said, so I’m going to hyphenate these two words.’  Which created such a mess.  So we have no idea what’s going on there.

“There’s a lot of work to be done with elephant taxonomy, biogeography and systematics and comparisons between China, the Levant, East Africa and India.” 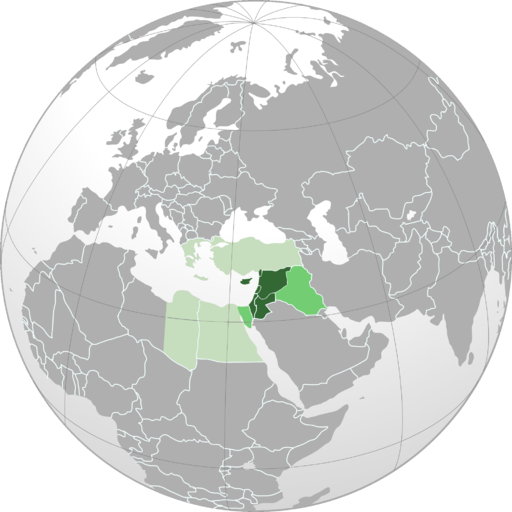 Image of the Levant (Public Domain)

Dr. Jukar and other colleagues have also recently published papers on the earliest known fossil of Hexaprotodon, an extinct hippo, from South Asia, and the first record of a Hippaprionine horse (Plesiohipparion huangheense) from the Indian Pliocene.

He is currently working with Dr. Adrian Lister of the Natural History Museum in London to further understand the various proboscidean fossils in the Siwalik collection.

This is important work, but Dr. Jukar pondered its reception to the wider world.

“For a long time paleontologists have been criticized as being mere stamp collectors because we find things and then we name them and then we try to figure out in what larger group they belong to.  But that is the basis of our data.

“Only when I have a comprehensive sense of what the species are, when they lived and where they lived can I start doing these more complicated community-level analyses.

“But because the basic science of naming a fossil might not be very exciting, [as it doesn’t directly impact] human life very much, it doesn’t get a lot of attention.

“I am definitely interested in the big picture questions of dispersal from Africa into South Asia, about the ecology of these groups, about how communities have changed through time, but I can’t really do a rigorous analysis until I figure out who the [basic] players are in this place.” 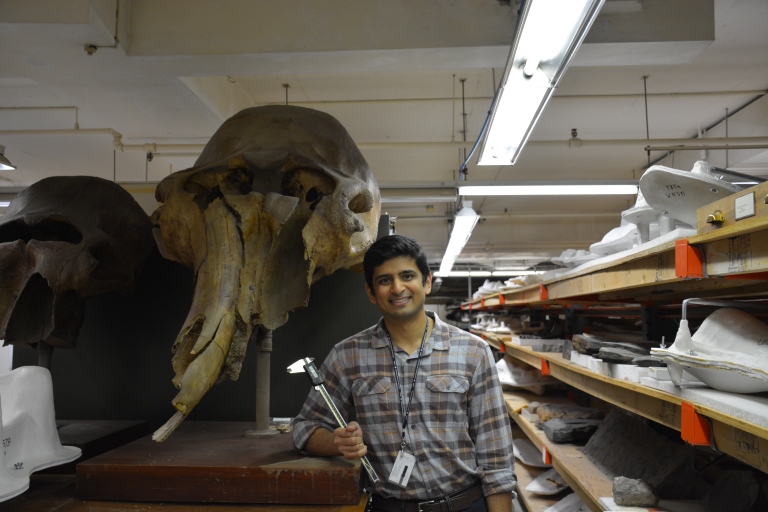 It was a GREAT pleasure and honor speaking with Dr. Advait Jukar.  Many, many thanks for your time, Advait, your help, your fascinating insight and your gorgeous images!! I cannot wait to read your future scientific papers!