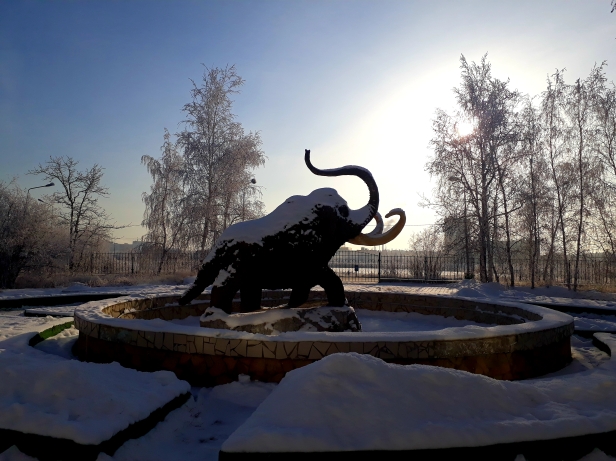 We had been speaking for almost an hour when I asked Charlotte Wrigley if the average person understands her research.  To which she simply replied,  “No.”

We laughed, but I wasn’t at all surprised. Her chosen field of study can’t be defined in a word. It’s too new, too complex.  And what had initially piqued my interest in her research is but a footnote now: mammoths.

She first thought of working on Passenger pigeons, a focus that lead her to the Long Now Foundation in the US.  Long Now (through Revive & Restore) is interested in recreating the bird that went extinct in the 19th century. Recreating extinct life is now referred to as ‘de-extinction,’ but at the time Charlotte was trying to determine her life path, this was not a well-known term. Today, it is synonymous with the fascinating and controversial effort across the globe to recreate a version of the mammoth.  Ultimately, however, that charismatic megafauna is not what drew her attention; it is the ancient world in which it used to live.

It is that very ecosystem that Sergey and Nikita Zimov, creators of Pleistocene Park, have spent their lives trying to recreate, and it is one of the reasons she traveled to Russia that summer.

Many people may not realize just how crucial permafrost and its preservation are to our planet.  Global warming causes permafrost thaw, and this thaw initiates an avalanche of destruction.  It changes the local ecosystems, which in turn affects the people and animals who depend upon those very ecosystems.  It causes slumping, landslides, and craters.  It dries up lakes. And it releases a host of greenhouse gases.

According to Adam Wernick at PRI (Public Radio International), “In some areas of Siberia, permafrost extends 5,000 feet below the surface…The top 3 feet alone is estimated to contain twice as much carbon as what’s already in the Earth’s atmosphere.”

Given these scary realities, it is yet scarier, that, according to Ed Struzik in Yale Environment 360, “…an estimated 2.5 million square miles of permafrost – 40 percent of the world’s total – could disappear by the end of the century…”

Permafrost is central to Charlotte’s research. And what better place to start than the Melnikov Permafrost Institute in Yakutsk, Siberia.

“[The Institute] was quite pioneering back in the Soviet [era],” Charlotte said. “Now, it’s barely funded. That was quite hard to see because they used to be very well-respected there. Since the Soviet Union collapsed, money has dried up. The pioneering research from that Institute is the reason an entire city was built on top of permafrost. The requisite engineering to do so is incredible! And that all worked really well until climate change began to make itself known. Now they’re looking at a situation where they need to start thinking about doing proper repairs to their buildings or evacuating people from these high-rise buildings because something really bad is going to happen. Buildings are going to crack and collapse. Pipes are bursting. Roads are kind of buckling.”

The Finnish anthropologist who owned the apartment in which she was staying introduced her to Gera, a local mammoth tusk-hunter, a mural artist, and an employee of the Mammoth Museum. Gera took Charlotte to that museum, which is where she met Semyon Grigoriev. Dr. Grigoriev offered to show her the Ice Age specimens stored within the museum’s freezer.

“It’s just a walk-in freezer,” Charlotte began, “and then, there in the corner is just a plastic bag with a mammoth in it! Bunched up. Curled up. There had been autopsies performed on it. It had been sliced, diced, prodded and poked. It looked very sad, really. This beautiful creature was just there in the corner. But, you know, they find a lot of them! And this was just one in a line of mammoths.”

Even more exciting, he announced that they had recently found a 42,000 year-old horse.  He and his colleagues were going to perform an autopsy; would she want to attend?

While there were a number of scientists she didn’t recognize, the one she did was an important figure in the de-extinction race: Hwang Woo-Suk.  Based in South Korea, he intends to literally clone a woolly mammoth.  His hope with any frozen Ice Age creature discovered in Siberia is to find useable DNA with which to clone.  Herein lies the challenge: DNA doesn’t preserve well over thousands of years. 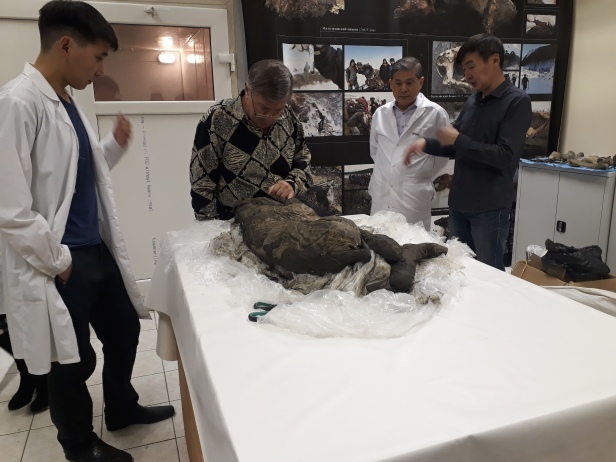 Autopsy on a 42,000 year-old foal in Yakutsk, photo courtesy of Charlotte Wrigley

On the other side of the world in Massachusetts, George Church and his team are attempting to create a hybrid mammoth/elephant—largely in a laboratory–using synthetic biology.  Their method is to engineer a creature that has some of the traits of the woolly mammoth.

“[W]e don’t necessarily want them to be exact duplicates of mammoths,” Dr. Church explained at a 2018 public talk at the Museum of Science, Boston. “We want them to have some features that make them better for modern life. [For example], we’ll probably want them to have very short tusks so it won’t tempt poachers to come in and kill them.”

Among other ethical concerns, this method relies on impregnating Asian elephants—an endangered species.

These two teams are not the only groups of scientists trying to reengineer or recreate extinct life, but they are some of the biggest players.  And their work is important to Pleistocene Park, because–if or when they do succeed–the plan is to transport the mammoths to the vast acreage comprising that park.

The mammoth steppe ecosystem relies on the environmental impact megafauna such as mammoths would have on the permafrost.  These hefty animals would compact the ground, keeping it frozen and keeping greenhouse gases trapped inside.  Grasses, rather than tundra, would appear, and these grasses would reflect solar radiation.

Sergey and Nikita Zimov welcome mammoths (or customized, reengineered animals that are part mammoth) to their Park, but at the moment, they are trying to populate it with existing species: musk ox, bison, Yakutian horses, yaks, sheep, Kalmykian cows,  moose and reindeer.

“Their fix for permafrost thaw is to get as many animals on the landscape as possible. This is why they’re not holding their breath for a mammoth because that might be 10, 20, 30 years away,” Charlotte stated. “They’re just getting as many animals as they can and just kind of throwing them out there and seeing what happens. Unfortunately, a lot of them die because you’re moving animals from a southern ecosystem—from southern Siberia, from Europe, from Mongolia—and you’re introducing them to a winter that can reach -50, -60 degrees Celsius.  So a lot of them die, and a lot of them refuse to procreate. [Additionally,] there’s a lot of human labor that goes into trying to force this change. And that’s why it’s fascinating and kind of humbling to see: how much of their lives they give across to that.  It is very much a could-all-collapse-any-moment situation, really!”

“I have reservations about trying to control Nature,” she admitted, “which it is in a sense.  But I can’t deny the passion and the drive. They’re just putting their lives into it completely.  It’s wonderful to see. And it’s an absolutely stunningly beautiful, incredible place: the Arctic tundra, the 24 hours of sunlight, and the silence. There is just complete silence, the likes that you or I have probably never heard. And so it will always be a very special place.”

There is no question that Charlotte regards the Zimovs with great respect.  Her time with them, in which they generously welcomed her into their home, made a significant impact.

“As a social scientist,” she continued, “I’m much more interested in why these humans are creating this world, this ecosystem, at great personal expense and hardship.”

Which brings us back to Charlotte’s field of study: permafrost, climate change, and the various ways in which humans across the globe are causing and attempting to address global warming.

One of the words she uses to describe her field is ‘biopolitics.’ Within that, there is ‘cryopolitics.’  Cryopolitics examines the various structures behind natural and artificial cold in a world in which ‘cold’ is increasingly valuable.  In other words, how do economics, industry, technology and those in power contribute to the web of hot and cold that impacts each and every one of us?  Both Pleistocene Park and de-extinction—at least, such are the claims of those engaged in de-extinction efforts—are attempts to circumvent natural disaster. Ways to halt the permafrost thaw and prevent further climate change. These are far from our only options, however.

Mammoth fossil in the Mammoth Museum in Yakutsk, photo courtesy of Charlotte Wrigley

“This is how I see de-extinction: Paving the way for humans to maintain control of the planet.  I’m not the biggest fan of de-extinction as a practice. I think it is an extension of human dominance. And when I say human, I’m referring to a particular notion within the Western capitalist world that loves the idea of a techno-fix for problems that they have caused!”

Charlotte’s path from Passenger pigeons to permafrost has lead her to author a book to be published at a future date.

Whatever the future holds, it is reassuring to me that Charlotte Wrigley is actively engaged in analyzing the world around us–critical of how we meet the challenges we face and ready, with intelligence and humour, to offer her insights.

Connecting with you, Charlotte, was not only an honor, it was enlightening, thought-provoking, and thoroughly delightful! Thank you so much for your generous help, your time, your gorgeous images, and your humour!  I look forward to reading all that you write in the future!