Image of the Cohoes mastodon at the NY State Museum in Albany, NY; photo taken by Jeanne Timmons

Most of us want to see what extinct animals looked like, know how they behaved, how they sounded: we want the details of their lives, above and beyond their bones.

What many might not realize is that paleontologists are indeed beginning to fill in those gaps. In other words, paleontology is no longer—nor has it been for quite some time—just about finding fossils.  It’s about peeling back the layers that form existence: how did a species grow and reproduce, where did that creature roam, what did it eat, did it experience famine or malnutrition, how did it impact its ecosystem, from what diseases did it suffer, was it a social animal, and how did it die?

For some paleontologists, finding these clues means using some of the most oft-discovered fossil of any species: teeth.

Drs Larisa DeSantis and Greg Smith of Vanderbilt University and Dr. Jeremy Green of Kent State have spent a great deal of time studying the details of North American mammoth and mastodon teeth.   Their goal has been to better understand what these animals ate and how they may have impacted the environment in which they lived.

North America during the Pleistocene (from approximately 3 million years – 12,000 years ago) was home to Columbian mammoths (Mammuthus columbi); Woolly mammoths (Mammuthus primigenius) in the northern regions only; gomphotheres that often had four tusks; American mastodons (Mammut americanum); and, we now know thanks to their discovery in 2019, Pacific mastodons (Mammut pacificus), all members of the Proboscidean family—a group known for its trunks (or ‘proboscis’), although not all members have them.  Columbian mammoths towered in size over Woolly mammoths.  Both were larger than their much hairier and smaller American mastodon cousins.  Pacific mastodons, possibly just as hairy as their counterparts, were a bit larger. Pygmy mammoths – smaller still – lived on the Channel Islands off of California. All of these species would be recognizable to any of us today as ‘elephants.’

Like elephants, these creatures were big animals with presumably big dietary needs.  Therefore, it is also assumed they would have had a significant impact on their surrounding environment.  (Remember that pygmy mammoths, although smaller than their counterparts, were still considered big on islands.)

For those of us outside of the field, teeth are the easiest way to determine whether a fossil skeleton is a mammoth or a mastodon.  Mammoths possessed unique teeth: relatively flat surfaces with loops that, like today’s elephants, seem perfectly adapted for cutting grass. Mastodons, on the other hand, had teeth that looked like what one might expect of ‘teeth’: high ridges that seem adapted to crunching and chewing harder substances such as wood. 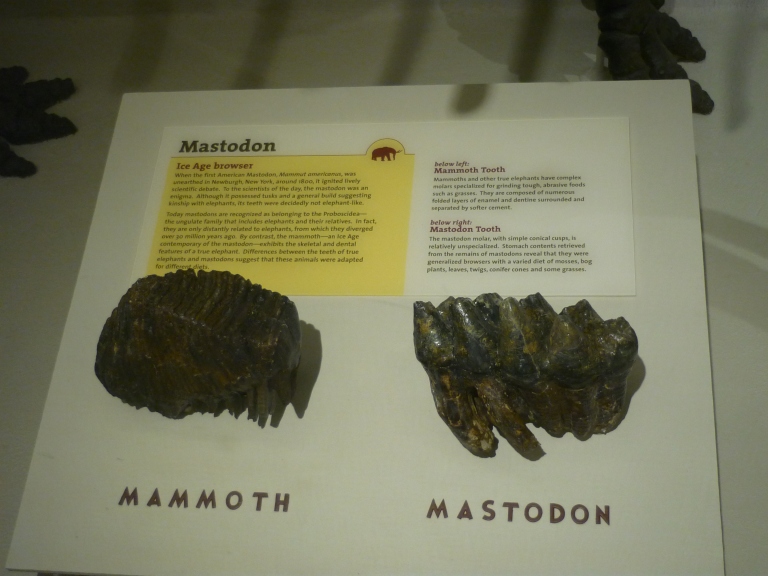 Examples of mammoth and mastodon teeth at the Harvard Museum of Natural History, photo taken by Jeanne Timmons

Based on the structures of their teeth—the tooth morphology–one could arguably put these species into two neat categories: grazers and browsers (mammoths and mastodons, respectively).

Add to the mix various isotopic analyses of proboscidean teeth, which determines what type of food an animal has digested over the course of its lifetime through chemical analysis of its tooth.  Here again, we have them generally falling into two categories: those that ate grasses (grazers) and those that ate woody material (browsers).

“Tooth morphology doesn’t actually tell you anything about what an animal was eating when it was alive,” Dr. Smith was careful to explain in a phone interview.  “It just tells you what it was capable of consuming because we assume that evolutionary history drove that adaptation. Because dental tissues incorporate dietary intake over a period of time, stable isotopes actually give us an average estimate of what an animal was eating over a period of months to maybe years from a geochemical perspective.”

Tooth morphology and stable isotopes painted part of the picture of mastodon diet; research on mastodon dung and gut contents have complemented that data.  All of it points to the same thing: mastodons in these regions were eating hard, twiggy browse.

Two pictures of Dr. Jeremy Green (top left, working on a tusk) and Dr. Greg Smith (top right, working on the teeth) researching the holotype of what would become Mammut pacificus at the Western Science Center. In 2017, this new species had not yet been discovered.  Photos taken by Jeanne Timmons at the Valley of the Mastodons Conference, hosted by the Western Science Center, 2017.

But Drs. Green, DeSantis and Smith wanted to know more.  What, they wondered, could they discover if they focused on one species (American mastodons) in specific areas of the country (Florida, Indiana, New York and Missouri) using dental microwear texture analysis of as many teeth as possible?  In other words, rather than lumping proboscideans into general categories, could they reveal more details about specific species and see any differences?

Dr. Smith explained that a few things impact teeth: abrasion (when food leaves marks on teeth), attrition (the impact of teeth upon other teeth, such as teeth grinding), and dissolution (which is when the tooth is chemically affected by saliva and acids within food).   Dissolution constantly removes evidence of abrasion and attrition.  Thus, dental microwear only gives us an indication of what an animal ate days or weeks before its death.  It’s a snapshot of its last meals, based on the pits, grooves and scratches upon the surfaces of its teeth.

Studying those impacts on teeth—the pits, grooves and scatches—is the heart of dental microwear.  And whereas much dental microwear analysis has been done with a bright light and a studious paleontologist, there exists technology today that makes the process considerably easier and less prone to error.  This involves scanning the teeth into software that translates the tooth surface into a 3D landscape, giving the analysis remarkably more depth and insight.  That technology exists in the Dr. DeSantis’ Dietary Reconstructions and Ecological Assessments (DREAM) Lab at Vanderbilt. And that process is dental microwear texture analysis (or “DMTA,” for short).

An interactive display designed by members of the Western Science Center, 2017, for the Valley of the Mastodons exhibit.  Photo taken by Jeanne Timmons.

“The nice thing about the method we’re applying here is that it’s independent of user measurement,” said Dr. Green by phone. “[In other words,] it’s not how many pits or scratches I see, versus [what] Greg [sees], versus [what] Larissa [sees]. A computer is doing it.  As long we keep the same method, and the same machine, and the same scanning parameters, we can scan as many mastodon teeth from different regions going forward and [then] add and compare them to the dataset that we’ve already built in this paper. So it is a starting point in that sense of building a bigger database of mastodon diet.”

“And then if you start adding species like mammoths and gomphotheres into the mix, then you can start getting things between species, differences in diet, not just within species.”

Juvenile and adult mammoth mandibles at the University of Florida. Photo taken by and courtesy of Dr. Gregory Smith.

What they discovered is a significant step in adding color to animals we know only through what they left behind.  Confirming that American mastodons did, indeed, eat a tough diet of woody material, they also found regional differences in the types of food these animals ate.  Mastodons in the southern regions ate a somewhat softer diet than their northern counterparts.  These differences indicate ‘adaptability’ within the species to eat what is available in the environment.

“I did want this to be clear to the people reading it that are professionals,” asserted Dr. Green, with signature humor and enthusiasm, “it’s not groundbreaking that we discovered that ‘hey, mastodons are browsing and eating woods and twigs!’  We know that.  There’s so much data out there. What we’re looking at is how diet changes in space and time within a single species.  So instead of lumping mastodons as this one-size-fits-all [species], we now know that that’s not true.”

“Since extinct mammoths and mastodons are not the same as modern elephants,” Dr. Smith added, “we needed a well-studied fossil site in order to set a baseline for 3-dimensional DMTA, so that researchers could apply the method to other extinct populations. Since we had a pretty good guess as to what these animals were eating in Pleistocene Texas thanks to previously published stable isotope data, we hypothesized that it would be a model system. We knew that mammoths and mastodons were eating different things there (grass and shrubs, respectively) based on stable isotopes. Therefore, we predicted that dental microwear textures would be different, too. But that is not what we found at all! Ultimately what we found is that there really isn’t a difference at all – in fact, DMTA data for our samples looked virtually the same! Despite knowing that the animals are consuming different foods, the microwear signature was [nonetheless] very similar. This threw us for a loop – clearly, the microwear proxy record was telling us something very different than the stable isotope proxy record.”

These details—these first steps in unveiling animals that are still steeped in so much mystery—are important.  Like much of the research done on extinct animals over the past 200 years, we are moving closer to fleshing out the bare bones.

“The big take-away,” Dr. Smith stated, “is that to characterize these animals as ‘grazers’ or ‘browsers’ is a major oversimplification, and doesn’t really do us much in terms of understanding how they lived and interacted with their environment. What we have to understand is that these are large animals with major dietary needs living in a resource-limited environment. They are going to eat whatever they can to survive.”

“Like modern elephants, these animals were consuming TONS of different food, so it was probably much more of a mosaic-type landscape back then. You probably had some grass patches here, some forest patches over there, maybe a marsh in between, and these animals were migrating between all of these patches, consuming food in every little area. To quote one of our manuscript’s reviewers, they were basically non-selective lawnmowers. Sure, maybe on average, over a longer period of time across seasons, mammoths ate more grass and mastodons ate more browse; but on a day-to-day basis, their diets probably looked more-or-less very similar to one another.”

While not covered in this post, two more exciting papers on North American proboscidean diet were published following this 2017 research.

Jeremy and Greg:  “Thank you” is not enough to express my gratitude for your remarkable help, your patience, your graciousness and your generosity from the time we spoke to the time this has been posted here!  It was so much fun speaking with you both and learning more about your research. I look forward to future papers and discoveries! THANK YOU!!