A rather large bone, revealed by his bulldozer, prompted William McEvoy and his crew to cease work on the road and call the police. The police then called the local archaeological society, who, in turn, called an archaeologist at the local Natural History Museum.

When word got out that a mammoth had been discovered, visitors began pouring in to see the site.  Just a few miles outside of the town of Kyle in Saskatchewan, Canada, the excavation of these fragile bones from the hard clay was witnessed by an ever-growing number of people.  It is estimated that 20,000 visitors came to see the site that autumn in 1964.

Eventually, the plaster casts protecting the bones were taken to the Natural History Museum (now known as the Royal Saskatchewan Museum); radiocarbon dating was conducted.  Possible museum displays and skeletal reconstructions were discussed.

Once the cause of great local excitement, the bones of the Kyle Mammoth faded from view.

The references above to archaeology are not errors.  Although the bones found were paleontological in nature, the focus on the find—and, indeed, the very reason they were recently resurrected—was to determine whether there was any evidence of human-proboscidean interaction.  When no stone tools were recovered in the surrounding sediment and with no obvious signs of butchering on the bones, interest in the fossil seems to have collectively disappeared.  For over 50 years, the various bones found on that stretch of road have been shelved in the Museum’s collections.

“I had always planned on doing my thesis at the University of Saskatchewan and I knew I wanted to do my thesis on hunting and butchering strategies utilized by Paleoindian people,” explained Eliann Stoffel, a recent graduate, in an email.

Her interest was not specific to any one species of megafauna. She hoped to study any and all large animals ancient people may have hunted: camels, bison, horse, proboscidea.

“I had approached my supervisor, Dr. Ernie Walker, with this topic and he had spoken with a member of the Saskatchewan Archaeological Society, Frank McDougal, who had suggested taking a look at the Kyle Mammoth.”

Which is how the long-forgotten fossil came back into view in 2015.

“We knew that the mammoth belonged to a time when people were in North America and actively hunting mammoths so we had the possibility of finding some sort of evidence of humans on the Kyle mammoth.”

This evidence is rare in the area known as the Northern Great Plains, an area that encompasses Saskatchewan (as well as another Canadian province and five U.S. states).

“It was one of those projects,” she said later by phone, “that, as soon as it came up, I couldn’t turn it down.  It needed to be done.”

Travelling between Saskatoon and Regina (where the Royal Saskatchewan Museum and the fossil are located), Eliann spent many hours studying and analyzing the bones from the 1964 excavation.  This included five boxes of bone fragments as well as 56 complete or near-complete bones, such as vertebrae, mandible, a partial tusk, and ribs.  Also included were ungulate bones, which—like the mammoth—did not comprise a full skeleton and did not present any clear association with its proboscidean fossil companion.

About 20% of the mammoth skeleton survived; image courtesy of Eliann Stoffel, University of Saskatchewan

Eliann’s thesis presents a comprehensive taphonomic analysis of the mammoth bones, and this was done because she and her advisors “knew that we needed to keep in mind that we might not find any evidence of human involvement.”

The idea of determining who or what made any kind of marks on a fossil seems like an overwhelming challenge.  This was not an animal that died the other day.  In this case, it died roughly 12,000 years ago. That is a considerable amount of time in which—after an animal is butchered, killed or otherwise dies of natural causes–it can be scavenged after death, it can be moved and scraped by natural elements, it can be affected by its fossilization, and then possibly affected by the process of discovery (in this case, by a bulldozer). How is anyone able to read the marks on fossil bones and know what they represent?

“[T]he first giveaway is the colour,” she wrote. “Bone, when it has been buried for a long time, tends to become stained from the surrounding sediment but only the outer surface. So when someone (an excavator) knicks the bone, the unstained inner portion of the bone is exposed and tends to be a lighter colour.

“The other indicator can be the clustering of marks. [With] butchering, there tends to be more than one cut mark on the bone in the same general area, usually at muscle attachment sites, and they tend to be orientated in the same direction. Rarely do you find cut marks that intersect each other. They are usually parallel. In accidental knick marks there is usually just the single mark and it tends to be located in a spot that you wouldn’t generally find cut marks (i.e. on joint surfaces or midshaft of a long bone).” 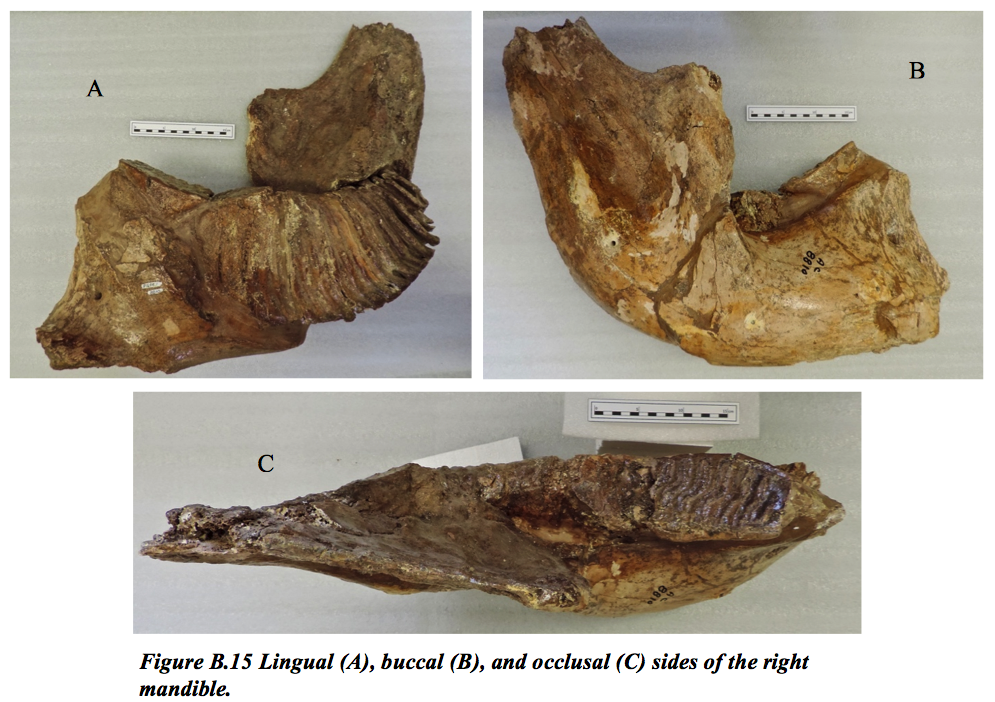 Photo of the Kyle Mammoth right mandible from her thesis; courtesy of Eliann Stoffel, University of Saskatchewan

Contrary to initial review in the 1960s, Eliann discovered a few tantalizing signs that this mammoth may have, indeed, suffered from trauma induced by ancient humans.  From a suspicious-looking lesion to a possible puncture wound on vertebrae to a puzzling set of lines in a bone fragment, there was reason to wonder whether humans had been responsible for these scars.

Ultimately, however, the first two were determined to be pathological. The lesions conform to known understanding of malnutrition in the form of osteolytic lesions.

Knowing her hope to find evidence of human interaction, I asked if this was a bit of a disappointment.

“[I]t was a bit of a kick in the knees,” she admitted, “but still a super interesting avenue of study in terms of pathology. I am more than thrilled with my findings though!”

Another startling discovery appeared in what she describes as a “spongy” bone fragment, shown above, which contain traces of blood vessels.

“I remember bringing it to my supervisor and we both scratched our heads over it…So we called on our resident bioarchaeologist Dr. [Angela] Lieverse to take a look and she wasn’t sure but suggested possibly something vascular. Sure enough, when I searched for studies fitting that criteria, a couple articles turned up. So it seems that it is an occurring phenomena but possibly not that common,” Eliann wrote.

Ultimately, Eliann determined that this was a young male woolly mammoth (between 28 – 35 years old) that was still growing at the time of its death.  She estimates it was 328.66 cm (approximately 10.8 feet) tall.  While the large open wound on one of the vertebra points to a possible puncture wound from Clovis weaponry, other pathological features point to a mammoth suffering from malnutrition.

Eliann’s enthusiasm for those who helped her in her research was apparent.

“[T]he folks at the [Royal Saskatchewan M]useum were more than happy to help in any way possible,” she expressed, “and it is something that I have always appreciated! Also my major funders [were] the Saskatchewan Heritage Foundation, the Saskatchewan Archaeological Society, and, of course, the Department of Archaeology and Anthropology at the [University of Saskatchewan].”

More than just a strenuous academic endeavor, Eliann’s research has painted a picture that has been missing for decades on a significant local paleontological find.

A Mammuthus primigenius-sized THANK YOU to Eliann Stoffel—not only for her time in emails and by phone–but also for her gracious permission to use a number of pictures from her work!  Her thesis is fascinating and well written.  I recommend it to all!  Eliann, may you find many mammoths with evidence of human association in the future!

Another enormous thank you to Dr. Angela Lieverse, head of the Department of Archaeology and Anthropology at the University of Saskatchewan, who was also responsible for the generous use of images from Eliann’s thesis!

And I am very grateful to Dr. Emily Bamforth at the Royal Saskatchewan Museum for connecting me to Eliann! I could not have written this otherwise. THANK YOU!! 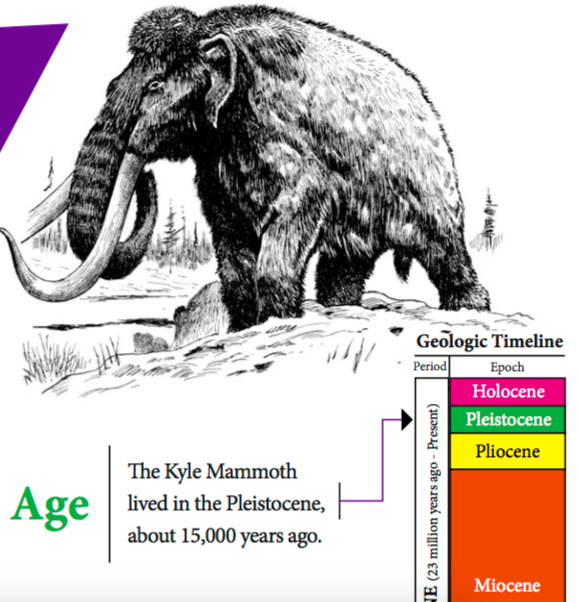 Screenshot from the aforementioned PDF of the Kyle Mammoth, Royal Saskatchewan Museum