Sometimes, it just takes a different point of view.

The largest known potential nursery herd of Columbian mammoth fossils in the world exists in Waco, Texas.  Of the 25 mammoth skeletons found to-date, 16-22 of them died at the same time. Something catastrophic occurred to these animals in the Pleistocene, but just what remains inconclusive.

While some speculate death by lightning, disease or miring, the predominant theory maintains that this is a herd of mammoths that died and were buried in the same flash flood.  It’s an idea that has stuck for many years given the existence of aquatic fauna and the evidence of an ancient river upon which many of the fossils have been found.

But Logan Wiest, Don Esker and Steven Driese of Baylor University have a different hypothesis, one published this past December in Palaios.  By studying traces on the bones available in situ, as well as those available in the nearby Mayborn Museum, they offer an entirely new idea: water didn’t kill them; its absence did.  Struggling to find water in a drought, these animals may have collapsed and died at a watering hole that could no longer sustain them or anything else.

Columbian mammoths were enormous animals.  In general, they are known to be much larger than woolly mammoths and considerably larger than mastodons, both of which were behemoths in their own right.

The mammoth skeletons at Waco are thought to be a matriarchal herd, consisting mainly of females and youth (no calves).  The evidence suggests a herd, and there is more research to be done to prove it using stable isotopes.  A single bull has been discovered in a different geologic layer.  Separate fossils of other species—none of them complete except for a western camel—have also been found throughout the site.

Don admitted he didn’t have an alternative explanation for the death of so many animals. He invited his colleague, Logan Wiest, to take a closer look at the fossil evidence.

“I’d brought [Logan] in hoping he’d look at the [site’s paleosols],” Don said. “I knew he was a trace fossil expert, so I’d hoped he [might] tell me a little bit about the conditions based on worm burrows, [for example].

“What he found instead was much more interesting! He found that there were all kinds of bite marks on the bones.  We didn’t find those all at once.  It actually took quite a while [before] we recognized what we were seeing as bite marks.  A lot of literature research and a lot of staring at bones.  Those bite marks shouldn’t have been there if the mammoths were immediately buried.

“One of the first things he noticed and was able to identify quickly were dermestid beetle bite marks: pits that the beetles dig in the bones when they’re going to lay eggs.

“I thought that perhaps [evidence of dermestid beetles] might be there, but I didn’t realize the significance of [that evidence].  He’s more of an expert on this than I am.

“And he knew that dermestid beetles don’t eat wet meat.  It actually has to be almost completely dessicated–no moisture left at all, just the fats and proteins–before the dermestid beetles will touch it. And that didn’t fit well with animals that were killed in a flood and rapidly buried.

“So, it was Logan looking at this and trying to think about what might be causing this instead of a flood, and he said, ‘Well, how about a drought?’

“I knew about some other evidence that really fit with that. So that clicked with me very quickly, particularly the fact that we’ve got both aquatic and terrestrial animals—a great diversity of them all in the same place.  What that suggested to me was a diminishing watering hole. And I wouldn’t have realized that if Logan hadn’t noticed the dermestids and figured out the drought angle.”

Beyond studying the available literature for trace fossil search images, they tested their ideas on the heads of deceased wild hogs using extant dermestid beetles. In effect: they put the fleshy heads into a contained area and let loose the beetles, who proceeded to consume all of the flesh, leaving clean skulls. It’s an efficient and chemical-free method used by scientists and museums the world over.  But for Logan, Dan and Steven, this provided more data for comparison. Traces left by the beetles on the wild hog skulls are similar to traces on the fossils in Waco. 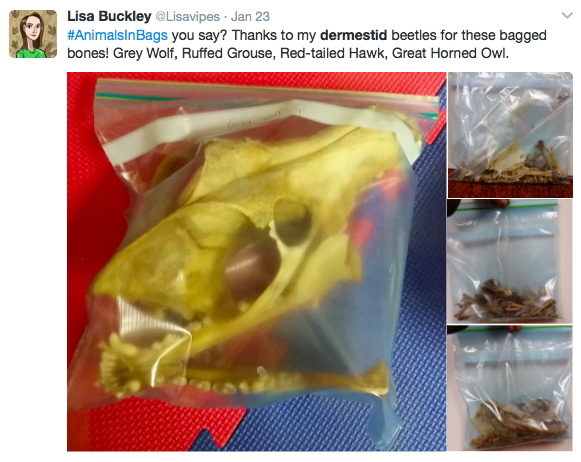 Screenshot of a tweet regarding the use of dermestid beetles from Dr. Lisa Buckley, paleontologist and ichnologist at the Peace Region Palaeontology Research Centre

“Previous studies have attributed trace fossils of this size and morphology to dermestid beetles,” Logan wrote in response to what prompted them–of all insects that might have left traces on fossils–to think of dermestid beetles.  “We simply wanted to test this notion by providing bone to dermestid beetles and seeing if these traces could be duplicated under controlled conditions. The beetles came from a nearby museum, but they are also native to Texas. We used the head from a hog simply because wild hogs are easily accessible in central Texas.”

A true ichnologist, Logan added, “I’ve also spent a great deal of time observing bones of modern cattle that were scavenged upon in pastures near my home.”

They didn’t just find evidence of ancient dermestid beetle traces; they found traces of animals who gnawed at the bones: rodents and carnivores, including a possible saber-toothed cat.  It is important to consider that animals drowned and then rapidly buried in a flash flood would not be accessible to these terrestrial scavengers.  This indicates that these Columbian mammoth carcasses were exposed on land long enough to be at least partially devoured.

That, too, is key. Remember that most of these mammoth fossils are articulated skeletons, complete except for missing tails and parts of their feet.  In an area devastated by drought, even scavengers would lack the energy to completely devour and tear apart a carcass.  All of these clues add more weight to the scenario proposed by these authors. 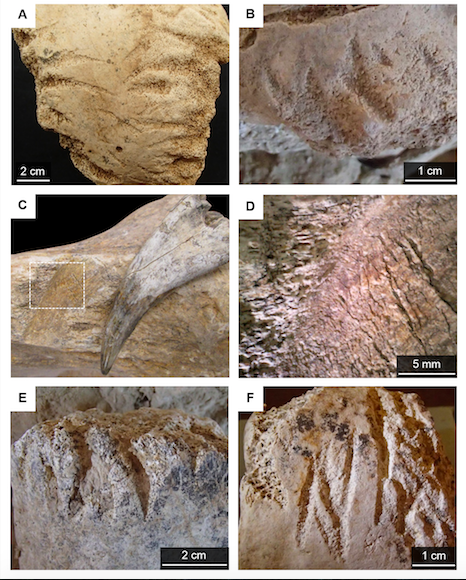 FIG. 5.—Brutalichnus brutalis on M. columbi skeletal elements. A) Arcuate grooves on femoral head 761a-BU-MMC. B) Relatively deep, arcuate grooves on mammoth Q in situ patella. C) Isolated arcuate groove on proximal radius (40-BU-MMC) of mammoth B. Note the similarity in curvature between the arcuate groove and the saber-toothed cat canine recovered from WMNM. The tooth is 6.4 cm for scale. Also note the faintly colored lines that are parallel to the arc of the groove. Dashed white box highlights the area depicted in D. D) Close-up image of groove depicting the microfractures within the trace on 40-BU-MMC. Notice how the fractures are all open towards the upper-right corner of the image, indicating the trace was generated from a force moving from the upper right towards the lower left. E) In situ femur of bull mammoth at WMNM. F) Arcuate grooves on mammoth Q phalanx 522-BU-MMC.

Describing the tools they used to study the fossils in situ, Logan wrote, “The low-angle light creates a shadow which makes the small structures on the bone surface to be easier to see and photograph. We used a Dino-Lite portable microscope to study the fossils mainly because we are unable to transport the mammoth remains from the site to the laboratory. Studying the fossils in place is the best way to ensure preservation of the original positions.”

In other words, because the fossils remain where they were found, they studied those available directly at the site.  Their paper states that the in situ fossils comprise 30% of the available Waco fossils.  The rest reside at the Mayborn Museum, some of which are available in their collections, but most of which remain unopened in their plaster jackets.

“It’s an amazing site,” Don enthused, “and there’s decades and decades of research there, on top of potentially a lot more excavation, too, because they are in NO WAY finished excavating. What they’ve got probably represents a fairly small fraction of the whole deposit.

“One of the things that Logan and I were speculating about [is] if you’ve got a really big regional drought, that should show up in multiple places in the geologic record, especially right in that area.  The bed that we’ve got marking the drought as this depositional hiatus could be covered with bones for acres and acres in every direction.

“And we know that it’s covered in bones at least 80 or 90 feet away from where the known deposits are because we’ve done core sampling that have pulled out large bone fragments.  We only did a couple of them—a couple at random!—and they hit bones both times.”

The Waco Mammoth site itself has been around for 39 years, but it has only been part of the National Park Service since July 2015, thanks to President Barack Obama and the work of many people years beforehand who helped bring that to fruition.  Don and I discussed this by phone, given the current political climate and the fears that some National Monuments might lose their status.

“That’s really worrisome,” he remarked. “And what really sticks in my craw about the Waco Monument in particular is that it’s costing the Federal Government almost nothing.  The city of Waco is paying for almost all of the upkeep.  The original buildings? That wasn’t tax money. That was done by good old fashioned fund-raising. And the day-to-day operations are almost all city.  There are a couple of rangers there alongside city employees and some signage and brochures. And that’s really all the Federal Government’s paying into it.”

“It’s a really incredible place.  There are not a lot of sites like this anywhere, as far as in situ fossils sites go.”

A Mammuthus columbi-sized THANK YOU to Don Esker and Logan Wiest for their remarkable generosity in answering my questions and for sharing their research with me.  It was an enormous pleasure speaking with and communicating through email with them.  I loved reading their research and hearing more of the history behind it!!

You can read the paper here.

A sincere and enthusiastic thank you to Kathleen Huber, Managing Editor at Palaios, for her gracious permission to use the figures contained in this post!