“I often wrapped wet clothes around my head in order to cool my brain during digging.”

Dr. Ralf Kosma, curator of paleontology at the State Museum of Natural History in Braunschweig, Germany, was part of an international team that excavated fossils in Niger during the late 2000s.

“[T]he heat was incredible,” he wrote in an email, “especially in April/May. Usually I can stand the heat, and I did in Niger, but many colleagues in our team (both German and Nigerien) became ill as a result of the horrifying heat.”

Much of the country—particularly in the northern region, which is where Dr. Kosma and team excavated–is in the Sahara desert.  In an area devoid of many trees (hence, shade), where temperatures are regularly above 100 degrees Fahrenheit and where water is in short supply, heat is a crucial concern.

Word of a large dinosaur bone traveled from Niger to Germany by way of Edgar Sommer, both a friend of State Museum of Natural History Director Dr. Ulrich Joger and someone with ties to an educational organization in Niger.

Paleontologists from the museum worked together with those from the local Aderbissinat community: a people comprised—like the country (and the continent!) entire—of various cultures.  Among those cultures are the Tuareg, the Hausa, and the Fulani people.

“This was organized,” Dr. Kosma wrote, describing who they hired from the community, “by Ahmad Bahani, our local Tuareg partner, and Mohammed Echika, Tuareg Chief and Mayor of the village Tadibene…”

Picture was taken in spring 2007 in Aderbissinat at our field camp at the Spinophorosaurus site. 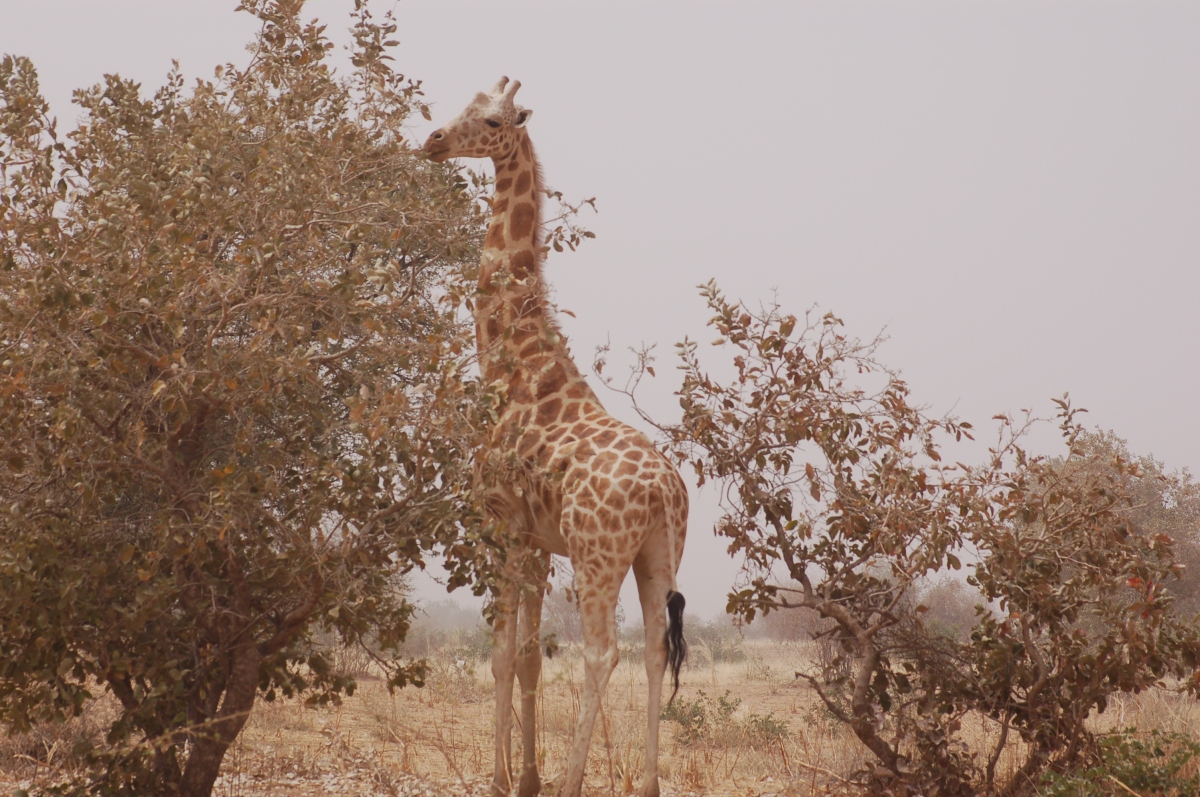 They camped in the field—using a campfire to cook food, some of it local, some of it brought with them in tins from Germany.  Along with the heat, they dealt with several sandstorms.

“It was peeling our skin. One was really hard and we took shelter in our laboratory truck.”

But they were also excavating at a time when civil war broke out within the country.

“We were,” he wrote, “protected by the army and by Mayor Mohammed Echika.”

“We encountered snakes, scorpions, a monitor lizard, geckoes, skinks and a variety of toads, birds and mammals. Due to our director being a herpetologist we were well prepared against bites of venomous snakes. At night we went snake hunting with [flashlights].” – Dr. Ralf Kosma.  Caption and photo courtesy of Dr. Ralf Kosma

Between 2005 and 2008, the team excavated several places near Aderbissinat.  Petrified wood fossils of Taxodioideae amongst other conifers, fossil crocodile teeth, and ganoid fish scales indicate that the arid area of today was actually swampy and wet in the Jurassic.  Perhaps their most exciting finds: a partial sauropod skeleton and 5 individual theropod trackways.

Excavation of the sauropod took place in 2007; removal of the fossil occurred in 2008, when it was taken to the State Museum of Natural History in Braunschweig. Now on permanent display in its dinosaur hall, the partial sauropod is 8 meters long: 37 caudal vertebrae and 5 fused sacral vertebrae. 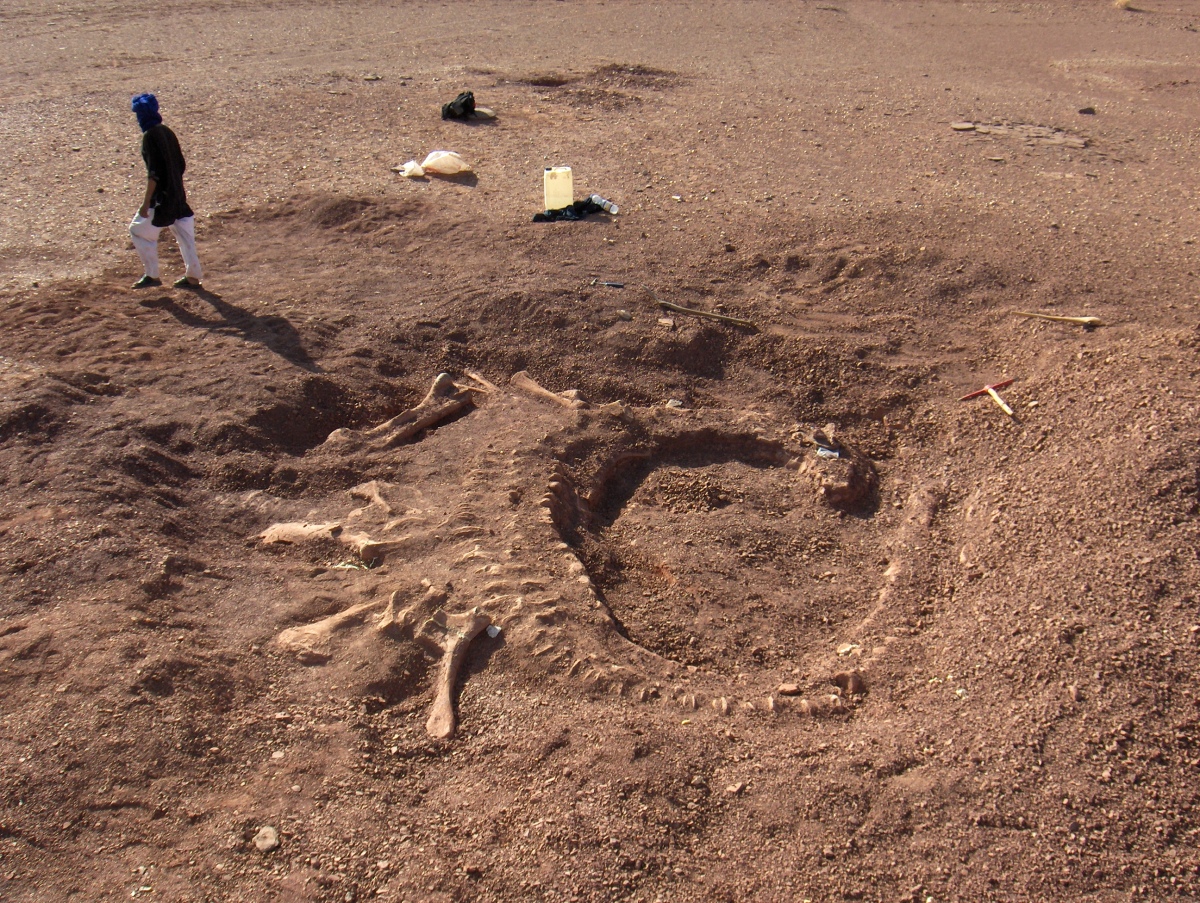 Specimen 1 from Spinophorosaurus nigerensis [a different fossil and species from the one discussed in this blog], directly after excavating in November 2006. The specimen was almost completely articulated. This specimen was later taken by a Spanish team and brought to the paleontological museum of Elche in the vicinity of Alicante in Spain. The person on the picture is Ahmed Bahani, our Tuareg coordinator. Photo and caption courtesy of Dr. Ralf Kosma 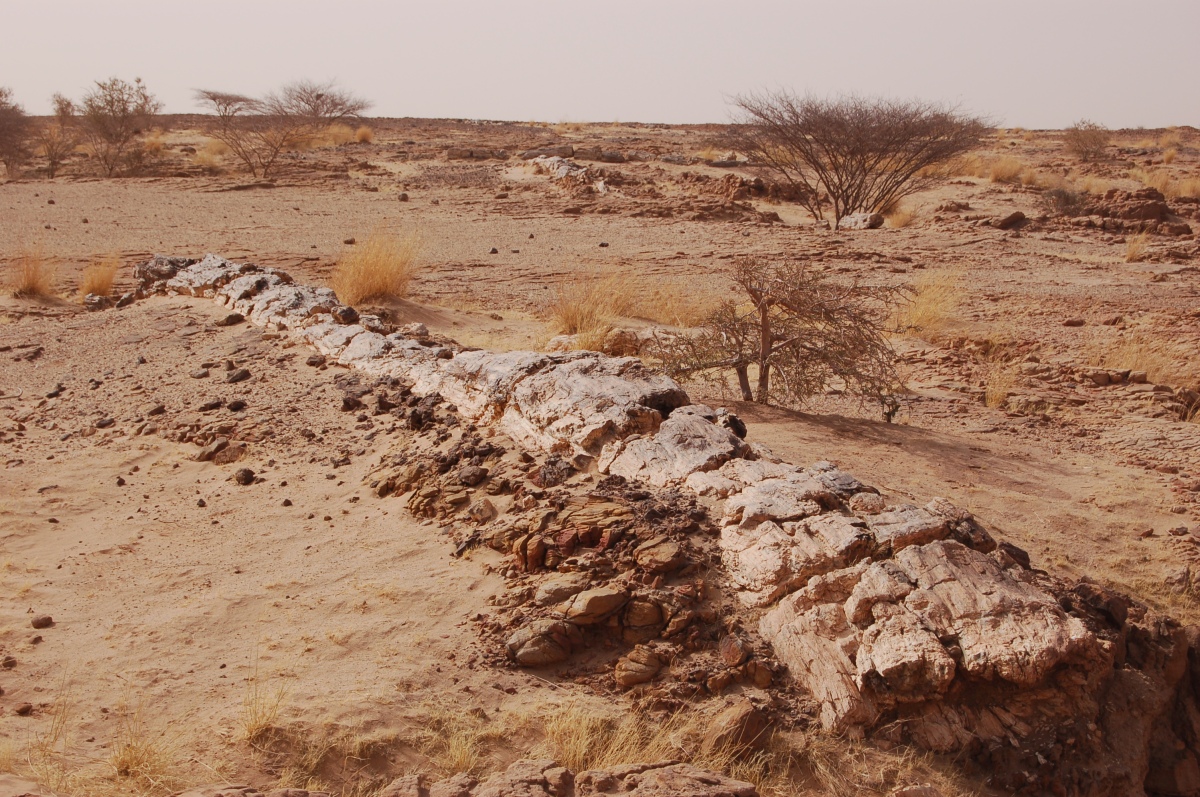 Fossilized tree trunk on top of the cliffs of Tiguidit. 2008. Probably Cretaceous. (Attention! If you thought this is a sauropod vertebrae – it is not!) Photo and caption courtesy of Dr. Ralf Kosma

There is a debate—since soft-tissues rarely fossilize—about what existed between vertebrae in dinosaurs.  What connected the bones, of what did that connection consist, and how exactly did it make that connection to the bone?  We don’t know.  But research gives us insightful clues.

Dr. Witzmann and team, in their 2016 paper (Subchondral cysts at synovial vertebral joints as analogies of Schmorl’s nodes in a sauropod dinosaur from Niger), looked to the work of Steve Salisbury and Eberhard Frey.  Comparing extant and extinct crocodile vertebrae with that of mammalian vertebrae, they found evidence pointing to synovial joints in dinosaurs.  This is in direct contrast to the discovertebral junctions known in mammals. The two are shaped differently, enable different range of movement within the joints, and are comprised of different substances.

Ultimately, we don’t know for certain whether dinosaurs had a discovertebral junction or whether they had synovial joints. This is important because these distinctions impact our understanding of the Nigerien sauropod’s pathology.

A 1978 paper by Resnick and Niwayama suggests subchondral cysts near synovial joints result in the same pathology as “Schmorl’s nodes,” a pathology that presents as holes or lesions in the bone. This is particularly interesting, as, thus far, only extant mammals (animals with discovertebral junctions) have exhibited traces of Schmorl’s nodes. (Only one case of possible Schmorl’s nodes in a reptile was published in 2001.)

CT scanning provided further insight into the sauropod vertebrae.  While the team wondered whether the holes might be the work of ancient insects, this was discounted because there are no traces of insect mandibles and the holes are too large.  As the vertebrae were articulated when they were discovered, it was determined the space was too small for tiny mammals to make any impact postmortem.  The team therefore suggests that the lesions on the sauropod vertebrae are subchondral cysts, perhaps an analog to Schmorl’s nodes. 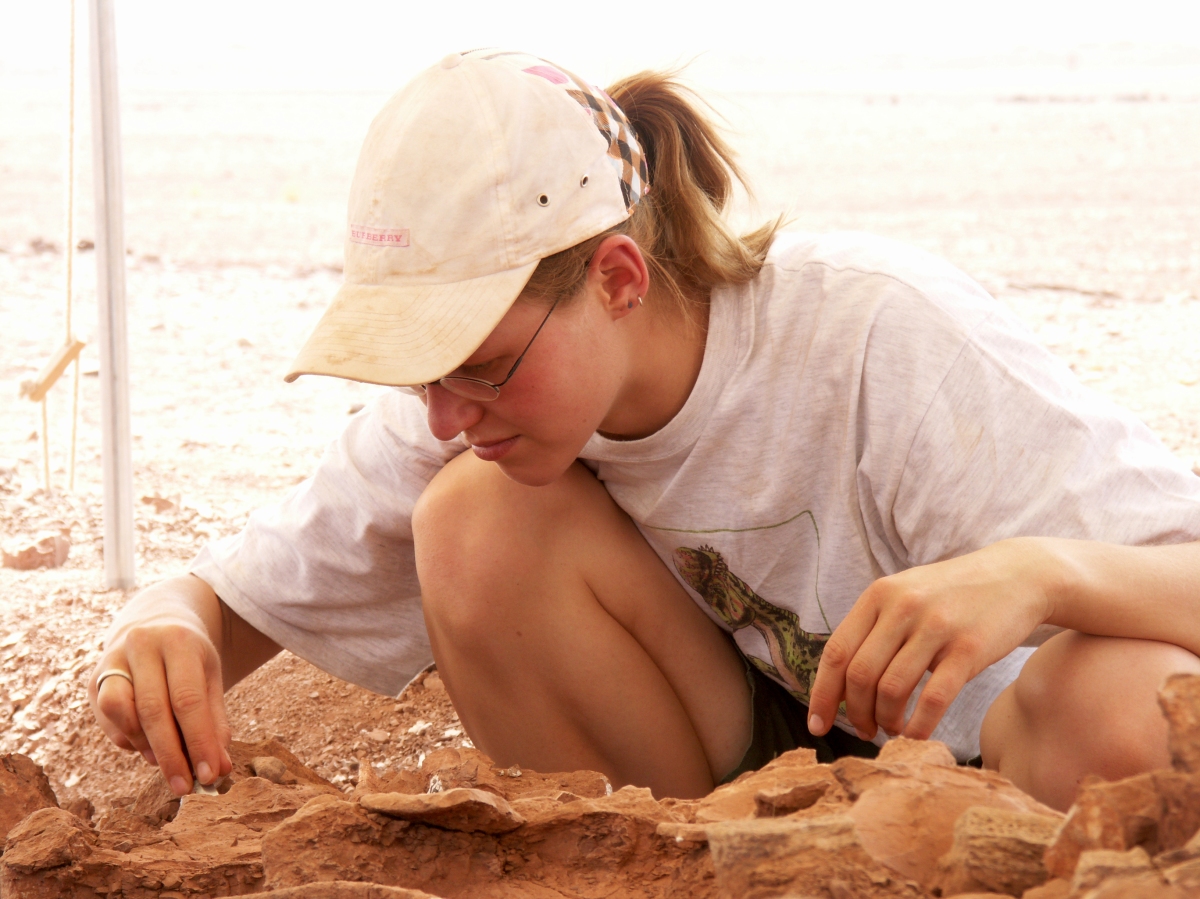 The fossil footprints—120 tracks thus far, all of which remain in-situ in Niger—were discovered in 2007 and 2008.  Researchers from the Archaeological Institute of the University Abdou Moumouni (Institut de Recherches en Sciences Humaines, Niamey) and paleontologists from the German Museum worked together to both find and study them (Alexander Mudroch, Ute Richter, Ulrich Joger, Ralf Kosma, Oumarou Idé, Abdoulaye Maga in their 2011 paper: Didactyl Tracks of Paravian Theropods (Maniraptora) from the ?Middle Jurassic of Africa).

Casts and molds were taken of the tracks, of which, it was determined there are 5 distinct trackways.  Their unique shape gave rise to a new ichnotaxon: Paravipus didactyloides.

Although found in an area believed to be by a stream or lake during the Jurassic, the footprints are not believed to be swim traces.  Nothing in the sediment supports this.

There is, however, indication that two individual dinosaurs walked together at one point.  The size and shape of the footprints suggest those dinosaurs were theropods, possibly Deinonychus.

Taking casts of the perfectly preserved Paravipus didactyloides trackways. About 1 mile SE of the Spinophorosaurus site, Aderbissinat. These tracks were later scientifically described in PlosOne by our team. They were caused by rather large dromaeosaurids (“raptors”). The tracks are numerous, large, perfectly preserved, the first proof for this group from rocks as old als middle Jurassic and, last but not least, the first proof for this group in subsaharan Africa. The person with hat is Michel Rabe, volunteer at our museum. The three guys to the right are Tuareg and Hausa helpers. Photo and caption courtesy of Dr. Ralf Kosma

After removing the silicone mould of the Paravipus tracks. Michel Rabe (with hat) and me (with turban). Photo and caption courtesy of Dr. Ralf Kosma

In 2009, the State Museum of Natural History in Braunschweig opened “Projekt Dino,” an exhibition highlighting dinosaurs from West Africa.

“It was open to public for 4 months until March 2010, as far as I remember,” wrote Dr. Kosma. “Afterwards Spinophorosaurus [nigerensis—another sauropod from Niger] and Jobaria [tiguidensis] were moved to our main building.  Since 2010, the Niger-story is represented in our permanent exhibition…[W]e dedicated a complete hall–our dinosaur hall–to that topic.  Visitors of all ages are very fascinated by these skeletons. They are a central point of interest and strongly help the understanding of Earth history…Many school classes come here to learn about the giants of the Mesozoic.”

The acknowledgments at the end of “Subchondral cysts at synovial vertebral joints as analogies of Schmorl’s nodes in a sauropod dinosaur from Niger” state: “We also thank the people of Aderbissinat, Niger, for all the support and help they have offered us during our field campaigns.”

At the beginning of “Didactyl Tracks of Paravian Theropods (Maniraptora) from the ?Middle Jurassic of Africa,” it is noted that in exchange for paleontological work and recovery of fossils, part of the funds donated for the research were given toward building a local school, providing food for the children and 20,000 school books.

In corresponding with Dr. Kosma, one of his comments struck a personal chord with me:

“We all miss Niger very much: the country, the people, the desert, and would like to go there again digging for dinosaurs. We are still in contact with the local people, and they tell us the situation of the civil war is getting better right now.”

An absolutely tremendous and heartfelt thank you to Dr. Ralf Kosma, who was not only very generous with the pictures he provided of his experiences, but with his help and patience with this blog.  It took much longer to write this post than normal; he was exceedingly kind throughout the process.

An equally heartfelt thank you to Dr. Florian Witzmann, who not only put me in touch with Dr. Kosma, but helped clarify some points on his research.

A special thank you to Dr. Emanuel Tschopp who kindly confirmed the species of sauropod to be Jobaria tiguidensis (so far!)